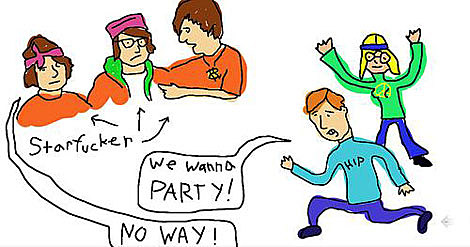 "STARFUCKER is an indie supergroup consisting Sexton Blake's Johh Hodges, Junkface's Ryan Biornstad, and Mr. Fredrick's Shawn Glassford. It's poppy, it's psych, it's fun, it's brilliant...it's like they went to see Rocky Horror and decided live by the "Don't Dream It, Be It Moral" message." [iHeartComix]

"No, Reggie Bush and Drew Brees don't have record deals, and All Saints haven't modified their name for a reunion. All the Saints are a muscular psych trio from Atlanta (via Alabama), and they're also the newest members of the Touch and Go family." [Pitchfork]

Starfucker + All the Saints = 2 reasons to get moving early Saturday. All dates below...