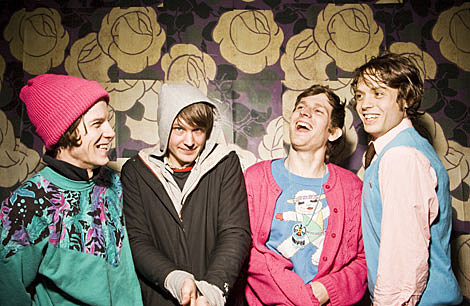 It's been an exciting year for Portland, OR's favorite breakout band, Starfucker, and today is an exceptional day. Last month, just as the four-piece were poised to set sail on an extensive North American tour, they announced a name change contest that allowed fans to play a pivotal role in re-naming the band. After many votes and infinite good ideas, the guys have chosen PYRAMID as their new moniker. They will perform their last ever show as Starfucker at Portland's venerable Wonder Ballroom on Halloween, so if you have a hankering for infectious beats and a costume contest judged by some of the members of the band, then look no further.

In addition to the name change news, PYRAMID are will self-release their debut UK single via their new imprint DDD featuring "Medicine," from 2009's Jupiter EP. "Medicine" will be available exclusively at London's Rough Trade stores as a limited edition, deluxe white vinyl 7"....

For more information on all things PYRAMID, check out the guys' new website here: www.pyramidlovesyou.com [PR]

As of this second, that link just redirects to their MySpace that still says Starfucker. Pyramid was not one of the ideas that was proposed here on BrooklynVegan.com. Pictures from their recent show at Santos Party House, HERE.