As mentioned, Iowa emo band Stars Hollow are finally following their two EPs, demo, four-way split (with Catholic Werewolves, Internet Dating, and Employer), and standalone 2019 single with their first full-length. It's called I Want to Live My Life, and it arrives May 7 via Acrobat Unstable (pre-order). "It mainly took so long to get this out because we were funding the recording process ourselves," the band tells us. "This record means a lot to us, so we wanted to make sure that we did it right, and doing it right isn’t always cheap. We had some offers from labels, but we decided that we wanted to be able to do the record on our own terms so that we could have more freedom and control in making a final decision."

"When it came time to find who to work with, we had offers from labels that we really highly regard and admire. After talking to everyone we were considering, Acrobat Unstable became the clear choice. They really care about our band and this record. I think they’re going to be an important staple in this wave of music, and we’re really excited to be a part of that growth."

The first single is "With Weight," which combines the mathy noodling of '90s Midwest emo with the roaring, anthemic, post-hardcore-fueled emo of the early 2000s boom, and Stars Hollow do it in a way that feels totally modern. As with other Acrobat Unstable bands like awakebutstillinbed and Short Fictions, Stars Hollow know how to reshape familiar-sounding influences and make them their own.

"With Weight" comes with a video, and here's what the band tells us about that: "In the past, we’ve done music videos that are really serious. I think we were all on the same page to do something a little more light hearted this time around because it better suits our music. Our drummer had access to a skating rink, and we decided it’d be cool to do a birthday themed video where no one really shows up to the party except the band. We had access to the whole place which was really cool. It’s just a fun video with a slightly melancholic feel to it which is pretty in line with our music." Indeed! Check it out below. 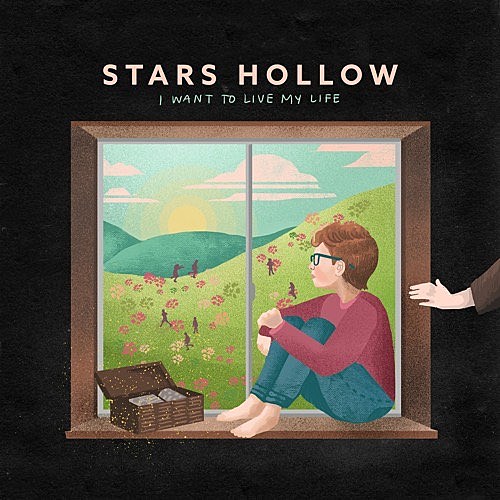 Tracklist
I want to live my life
stuck to you.
until i bleed out.
out the sunroof.
with weight.
...
through the windshield.
beside you.
at the bottom.
but better.