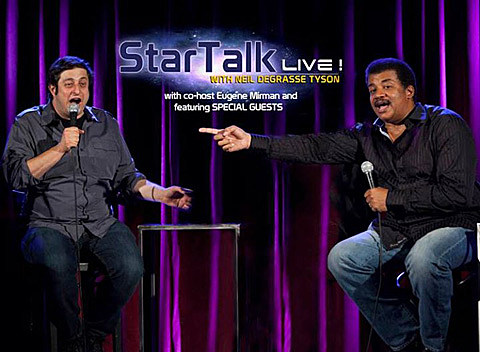 Startalk Live! with Neil deGrasse Tyson and Eugene Mirman is coming to the Apollo Theatre on May 28. Tickets are currently on StarTalk presale (password = COSMIC), there's an AmEx presale starting Wednesday (4/1) at noon, an Apollo presale starting Thursday (4/2) at noon and tix go on sale to the general public on Friday (4/3) at noon.

StarTalk will become a weekly late night talk show on the National Geographic Channel starting April 20. That will have a wide variety of guests and each episode will feature a minute-long rant from Bill Nye (a la Andy Rooney on 60 Minutes). The show will be filmed in front of a studio audience at the American Museum of Natural History's Hayden Planetarium.

In other news, Eugene Mirman just performed in NYC as part of the "Bob's Burgers Live!" tour that hit Beacon Theatre on Friday (3/27). From Decider:

The lights go down and Benjamin (Bob Belcher) and Mirman (Gene) rise to the occasion to introduce how the night will play out -- every member of the Belcher clan will do their own stand-up routine, followed by a live table reading for an upcoming episode where they'll be joined by Kevin Kline (Mr. Fischoeder), Larry Murphy (Teddy), and showrunner Loren Bouchard. They then introduce Dan Mintz, known for his role as the inimitable Tina Belcher, who meekly took the stage following deafening applause. Needless to say, Mintz can't get through his first joke without the crowd breaking out into uproarious laughter -- Tina comes from that guy? -- and forcing him to start again. One might not expect Mintz, who looks like he enjoys quiet nights in with a good book after browsing Whole Foods and indecisively going home with nothing, to have been a part in creating one of the most fully formed female characters in primetime. Like Tina, however, Mintz gives whole new meaning to "deadpan" by refusing to smile during his entire set before bringing out his "sister," Kristen Schaal, followed by Eugene Mirman, John Roberts, and H. Jon Benjamin, who all brought the house down in their own fashion and comedic style before sitting down for a hilarious table read of an upcoming episode.

Eugene Mirman has a handful of live appearances coming up (including standup, StarTalks, and other things), though nothing in NYC right now, and those are listed below.