"Also? That the NYC marathon starts in Staten Island, which has been devastated & received such paltry aid, is a slap in the face. #CancelIt" - @julieklausner

Grounded tanker (not the Ferry) in Staten Island, post-Sandy (via @jennkud) 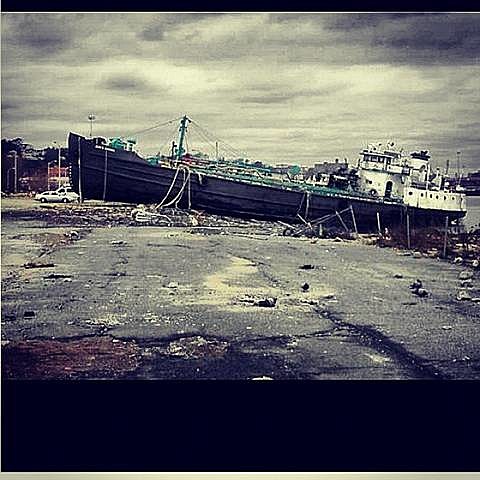 NYC is starting, slowly, to come back to life in the wake of Hurricane Sandy. The Staten Island Ferry, the terminals on both ends of its route suffering serious flooding, reopened today (11/2) at noon today with half-hourly service in both directions, which is good news. But that's about the extent of the good news post-Sandy for the NYC borough. The power is still out, and Staten Island railway is still suspended. And many of the residents feel like the borough, which was hit hard by Sandy, is being forgotten about.

This has come to a head with the Mayor's decision to keep the NYC Marathon (which starts in SI) on Sunday as planned, using giant generators to power the tents at the Central Park finish line. (It made the cover of the Post today.) Generators (and the money spent on them) many think could be put to better use, say, in Staten Island.

"Debate over whether to hold the race began soon after Hurricane Sandy hit the region Monday night. Critics have said that it is in poor taste to hold a race through the five boroughs while people are trying to cope with the storm's aftermath and that city services should focus on storm relief, not the marathon. Proponents of the marathon believe the race will provide a needed morale boost, as well as an economic one." [NY Times]

Speaking of the mayor, he just confirmed that NYC is up to 41 deaths due to Sandy. Two of those are the previously missing little boys that got separated from their mother in Staten Island.

In other power news, ConEd is saying that juice will hopefully be restored to Lower Manhattan "early morning Saturday" which means, among other things, that shows continue to be cancelled. Our list of cancelled and not cancelled Friday night shows is HERE.

Subways and buses remain free today (here's the map of where the subway lines are and aren't going), and NY Waterway and Hudson ferry are up and running too.

Some news reports on Staten Island can be watched below...