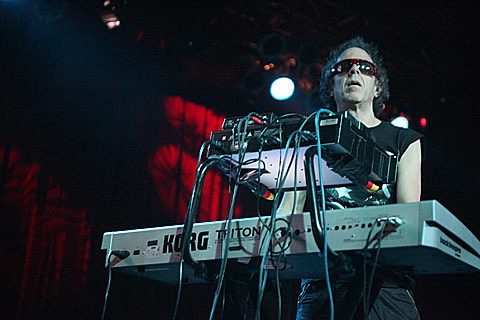 As discussed, artist Doug Aitken is presenting a traveling variety tour, Station to Station: A Nomadic Happening, which kicks off in NYC on September 6. The NYC show was initially set to happen at Duggal Greenhouse but has been moved to Brooklyn's RIverfront Studios (420 Kent Ave). The lineup for NYC has also been expanded to include synthpunk legends Suicide, in addition to previously announced names like No Age, Ariel Pink's Haunted Graffiti, The Boredoms and more. Also, Charlotte Gainsbourg & Connan Mockasin have dropped off.

The NYC stop on the tour is sold out, but tickets are still available for other stops on the tour, some of which also just got lineup and venue updates. Other additions includes Thurston Moore & John Moloney/Caught on Tape (Pittsburgh, Chicago) and Evan Holm (Oakland). And the Santa Fe stop has been moved from Lamy Happening to the Santa Fe Farmer's Market Pavilion.

One half of Suicide's lineup, Martin Rev, can also be seen in NYC at his Glasslands (10/19) show with Tempers and Infinity Shred (tickets).

Renowned choreographer and media artist Jonah Bokaer will present AIRLOCKS, an original trio that will perform a work inspired by Robert Rauschenberg's debut choreographic work, Pelican (1963), on the occasion of work's 50th anniversary.

Rirkrit Tiravanija, known for his participatory and performative installations, will hand out a surprise to guests, while Olaf Breuning will create a site-specific Technicolor smoke installation.

Sunday, September 8, 2013, 6:30-10:30 p.m.
Union Station/The Pennsylvanian, Pittsburgh, Pennsylvania
The Pennsylvanian was designed and constructed around 1900, and was originally a train terminus and office building for the Pennsylvania railroad. The happening in Pittsburgh will feature performances by Ariel Pink's Haunted Graffiti, No Age, Thurston Moore & John Moloney/Caught on Tape, YOSHIMIO (OOIOO / Boredoms) & Hisham Akira Bharoocha (Soft Circle / Boredoms) & Ryan Sawyer (Lonewolf) TRIO, The Kansas City Marching Cobras, a conversation between Doug Aitken and Alice Waters, and others to be announced.

Tuesday, September 10, 2013, 6:30-10:30 p.m.
Union Station, Chicago, IL
Originally designed by famed architect Daniel Burnham and completed in 1925 by the Graham, Anderson, Probst and White Firm, the Beaux Arts-style building is the setting for the Chicago happening, which will feature performances by Black Monks of Mississippi (choreography by Theaster Gates) No Age, Thurston Moore & John Moloney/Caught on Tape and White Mystery, among others to be announced. Chicago-based artist Theaster Gates and Black Monks of Mississippi will bring together elements of Eastern restraint, Gospel, and Blues music that is sure to be a transcendent and participatory experience.

Thursday, September 12, 2013, 6:00-10:30 p.m.
Union Depot, St. Paul, MN
Union Depot in downtown St. Paul has been transformed from a defunct rail station to an active transportation center in the heart of a thriving urban neighborhood and serves as the terminus of Twin Cities' newest LRT line, connecting the downtowns of Minneapolis and St. Paul. The evening will include performances by Eleanor Friedberger, No Age, White Mystery, and others to be announced.

Minnesota-based artist Kate Casanova's Vivarium Americana will be parked amongst the Nomadic Structures. It is a sculptural work in which the interior of a black 1976 AMC Pacer has become overgrown with live oyster mushrooms.

While guests arrive for the happening, a performance choreographed by the BodyCartography Project, using the produce of Fritz Haeg's Edible Gardens that was commissioned by the Walker Art Center, will take place.

Wednesday, September 18, 2013, 6:00-10:00 p.m.
Santa Fe Farmer's Market Pavilion, Santa Fe, NM
Station to Station will merge with this desert landscape to create a unique happening. Performers include Cat Power, The Handsome Family, Nite Jewel, THEESatisfaction, and others to be announced.

Saturday, September 21, 2013, 5:00-11:00 p.m. SOLD OUT
La Posada, Winslow, Arizona
Located 35 miles from James Turrell's Roden Crater, Winslow exists as an underground art community that was created through the passage of the rails and Route 66. La Posada, built by the Santa Fe Railway, will feature performances by Jackson Browne, Cat Power, Cold Cave, Giorgio Moroder, THEESatisfaction, and others to be announced.

Ed Ruscha gave Station to Station a recipe for a cactus omelet, and Chef Leif Hedendal will prepare the omelet for 200 people. This edible artwork will be served only in Winslow, and the recipe itself will be used to make a poster.

Tuesday, September 24, 2013, 6:00-10:00 p.m.
Skyline Drive-In, Barstow, California
In Barstow, Station to Station will move into a large, high-desert drive-in movie theater. At dusk, the entire grounds of the two-screen drive-in will be activated by experimental music and performances that will merge with moving images projected on the drive-in screens. The Skyline Drive-In will feature a unique performance by Beck created and composed exclusively for this event, plus musical performances by No Age, Cold Cave, Lucky Dragons, and others to be announced.

Peter Coffin's UFO will fly for the first time in the United States over the Barstow Happening. The design, based on popular depictions of UFO's, is covered by panels that hold 3,500 brightly colored LED lights that are controlled by a Pharos computer system and capable of displaying video.

Thursday, September 26, 2013, 6:30-10:30 p.m. SOLD OUT
Union Station, Los Angeles, California
Union Station is the main railway station in Los Angeles. In recent years, it has become a major transportation hub for Southern California serving 60,000 passengers a day. The happening will feature a unique performance by Beck created and composed exclusively for this event, plus musical performances by Dan Deacon, Sun Araw & The Congos, No Age, and others to be announced.