Ariel Pink at Do Division 2013 (more by Kirstie Shanley) 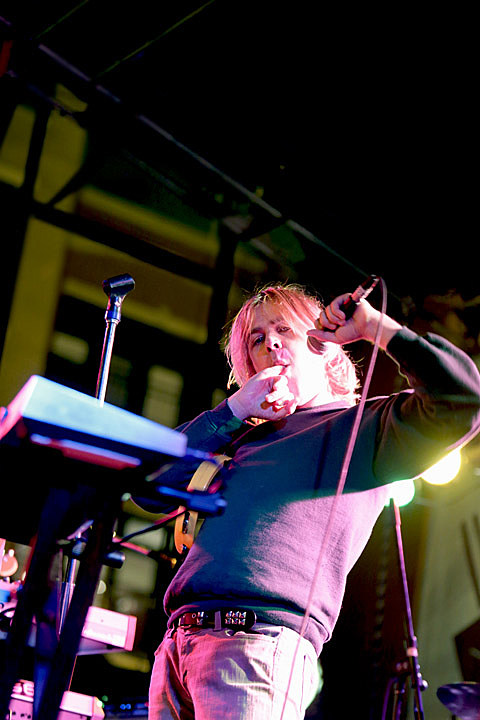 As discussed, artist Doug Aitken is presenting the traveling Station to Station: A Nomadic Happening tour this year, with a variety of different artists in different cites. The NYC stop on the tour (which is the start of this whole thing) happens on September 6, and since we last spoke, more details have been announced. It happens at Duggal Greenhouse in Brooklyn Navy Yard and runs from 6:30-10:30 PM.

Other artists added to other cities include Giorgio Moroder, Beck, Cat Power, Cold Cave, THEESatisfaction, Sun Araw, and more. Head to Station to Station's site for tickets and more info on the other cities. Full tour schedule (as it stands now), below...

Rirkrit Tiravanija, known for his participatory and performative installations, will hand out a surprise to guests, while Olaf Breuning will create a site-specific Technicolor smoke performance (which he will also stage in Barstow and Oakland).

Sunday, September 8, 2013, 6:30-10:30 p.m.
Union Station/The Pennsylvanian, Pittsburgh, Pennsylvania
The Pennsylvanian was designed and constructed around 1900, and was originally a train terminus and office building for the Pennsylvania railroad. The happening in Pittsburgh will feature performances by Ariel Pink's Haunted Graffiti, The Boredoms, No Age, and others to be announced.

Tuesday, September 10, 2013, 6:30-10:30 p.m.
Union Station, Chicago, IL
Originally designed by famed architect Daniel Burnham and completed in 1925 by the Graham, Anderson, Probst and White Firm, the Beaux Arts-style building is the setting for the Chicago happening, which will feature performances by Black Monks of Mississippi (choreography by Theaster Gates) and No Age, among others to be announced. Chicago-based artist Theaster Gates and Black Monks of Mississippi will bring together elements of Eastern restraint, Gospel, and Blues music that is sure to be a transcendent and participatory experience.

Thursday, September 12, 2013, 7:00-10:30 p.m.
Union Depot, St. Paul, MN
Union Depot in downtown St. Paul has been transformed from a defunct rail station to an active transportation center in the heart of a thriving urban neighborhood and serves as the terminus of Twin Cities' newest LRT line, connecting the downtowns of Minneapolis and St. Paul. The evening will include performances by Eleanor Friedberger, No Age, and others to be announced.

Kate Casanova's Vivarium Americana will be parked amongst the Nomadic Structures. It is a sculptural work in which the interior of a black 1976 AMC Pacer has become overgrown with live oyster mushrooms.

While guests arrive for the happening, a performance choreographed by the BodyCartography Project, using the produce of Fritz Haeg's Edible Gardens that was commissioned by the Walker Art Center, will take place.

Wednesday, September 18, 2013, 6:00-9:30 p.m.
Lamy, New Mexico
The site of the opening scenes of David Bowie's The Man Who Fell to Earth, Lamy is a desolate town with a population of approximately 220 people and a single room train station. Station to Station will merge with this desert landscape to create a unique happening. Performers include Cat Power, The Handsome Family, Nite Jewel, THEESatisfaction, and others to be announced.

Saturday, September 21, 2013, 5:00-10:00 p.m.
La Posada, Winslow, Arizona
Located 35 miles from James Turrell's Roden Crater, Winslow exists as an underground art community that was created through the passage of the rails and Route 66. The La Posada, built by the Santa Fe Railway, will feature performances by Cat Power, Cold Cave, Giorgio Moroder, THEESatisfaction, and others to be announced.

Ed Rucha gave Station to Station a recipe for a cactus omelet, and Chef Leif Hedendal will prepare the omelet for 200 people. This edible artwork will be served only in Winslow, and the recipe itself will be used to make a poster.

Tuesday, September 24, 2013, 6:00-10:00 p.m.
Skyline Drive-In, Barstow, California
In Barstow, Station to Station will move into a large, high-desert drive-in movie theater. At dusk, the entire grounds of the two-screen drive-in will be activated by experimental music and performances that will merge with moving images projected on the drive-in screens. The Skyline Drive-In will feature musical performances by Beck, Cat Power, No Age, Cold Cave, Lucky Dragons, and others to be announced.

Peter Coffin's UFO will fly over the Barstow happening. The design, based on popular depictions of UFO's, is covered by panels that hold 3,500 brightly colored LED lights that are controlled by a Pharos computer system and capable of displaying video.

Thursday, September 26, 2013, 6:30-10:30 p.m.
Union Station, Los Angeles, California
Union Station is the main railway station in Los Angeles. In recent years, it has become a major transportation hub for Southern California serving 60,000 passengers a day. The happening will feature performances by Beck, Dan Deacon, Sun Araw & The Congos, No Age, and others to be announced.