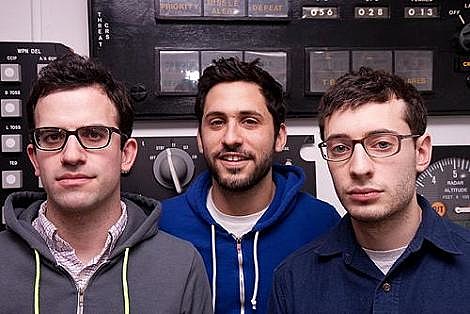 Brooklyn mathematicians STATS (formerly known as Stay Fucked) are playing a show at Death by Audio in their home borough on 6/18 (tonight) with Upsilon Acrux and Clan Of The Cave Bear. It's STATS' first show since bassist Tony Gedrich returned from a European tour with his other band, Extra Life.

This lineup dissolved in 2003 after self-releasing a debut EP, but Shteamer and Petrucelli soon reformed the project, working with bassists Ben Haberland and Andres Marino to record two more EPs and embark on a self-booked 2006 U.S. tour. Soon after, Shteamer and Petrucelli recruited bassist Tony Gedrich, also of Extra Life and Archaeopteryx, who has worked with the band ever since.

STATS' NEW EP, Marooned, is currently available via the band or for download above. The three song effort was recorded in Sept 2008 by John Delzoppo (of Clan Of The Cave Bear), mixed by Ben Greenberg (of Zs) in Brooklyn and mastered by James Plotkin (of Khylst, Khanate) in Hoboken. If you dig, and my guess is that if Keelhaul, Don Cab, or Dazzling Killmen is your bag then you probably will, then consider donating to the Brooklyn trio by using the PayPal button at the end of this post.

Meanwhile Ben Greenberg's band, Zs are prepping for a few dates of their own in the coming months, including local shows at Secret Project Robot on June 24th, Death By Audio on July 3rd, and Cake Shop on August 28th. The shows will serve as a coming-out party for their new 12" EP on The Social Registry, Music Of The Modern White, with the June 24th date serving as a record release party with 9/11 Thesaurus, Effi Briest, Grade 13, Earthbound, and DJ Jaiko Suzuki.

All Zs tour dates, the Marooned tracklist, and EP Paypal donation button, below...

Paypal donation button for the otherwise free EP above....