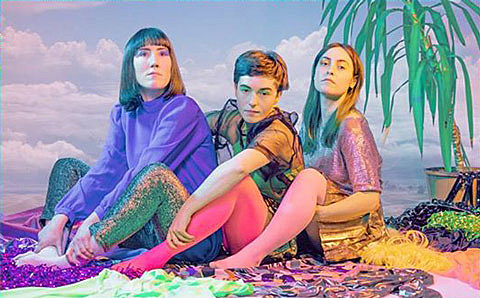 Stealing Sheep's sophomore album, Not Real, remains at the top (or near) my loose 2015 Favorite Albums list, a hard-to-categorize record that incorporates synthpop, faerie folk, prog and other genres into a genuinely fresh sound. They're not like anyone else, though as I've said before, the closest comparison you could make is probably Metronomy. If you haven't checked it out, you can stream it and check out videos for "Deadlock" and "Not Real" below. There are also a couple non-LP tracks that came with the Rough Trade edition of the album to listen to below as well.

The band will be making their NYC live debut at this year's CMJ Festival. The only announced show so far is the Flower Booking showcase which happens at Knitting Factory on October 17 with The Album Leaf, Diet Cig, Eternal Summers, S, and Lyla Foy also playing. That's a pretty good show. Tickets are on sale now.