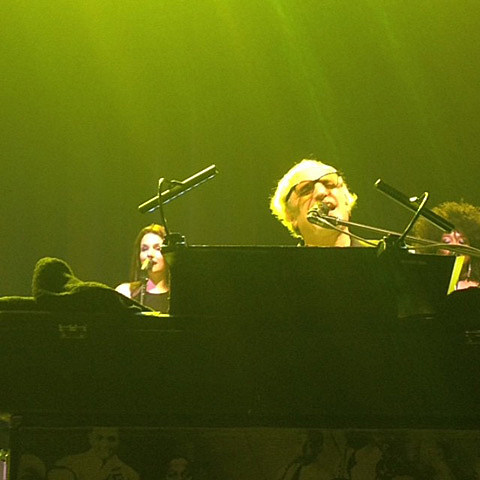 Steely Dan made the trek out to Coachella this year and acerbic frontman Donald Fagen kept a diary for Rolling Stone where he noted, "Aside from the music and the polo, one can visit a local gas station that features a brass plaque commemorating the 1991 arrest of televangelist Jimmy Swaggart for driving on the wrong side of the road in the company of a prostitute." As for the Dan's experience at the festival, here's what he said:

After hearing a few different bands through the open door, I noticed that many of them sounded a lot like the folk rock bands of the Sixties that were born in the wake of Bob Dylan's electric switchover, only louder and dumber. At the silliest level, Barry McGuire came to mind. Unfortunately, none that I heard approached the elegance and originality that Roger McGuinn brought to the Dylan-inspired group, the Byrds.

Steely Dan's self-described "slammin'" set was a pretty hit-friendly one, including "Hey Nineteen," "My Old School," "Reelin' in the Years" and "Kid Charlemagne." There was also a signature Walter Becker rant: "There were some financial considerations, I'm not gonna lie...We're here, we still got it, and if you want it come and get it... You're gonna know that your little tree has been shook, and that your world has been rocked" (via Billboard). Setlist is below.

Steely Dan do it again at Coachella this weekend and will be in the NY-area later this summer when they're on tour with Elvis Costello & the Imposters and play two nearby shows in NJ: August 1 at PNC Bank Arts Center and August 3 at Susquehanna Bank Center. Tickets for those shows are on sale now. All dates are listed below.