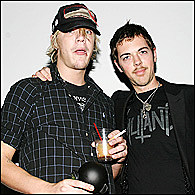 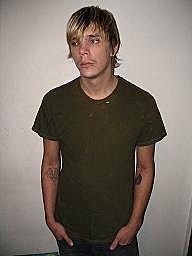 I didn't know Stefan personally, though I did see him out all the time. The picture above (he's the one with the hat) was just taken after he won a PAPER nightlife award.

"...The award goes to Stefan Lockdown and Spencer Product. Stefan raises his fist and leans into the mic, joking, 'I'd just like to thank everyone for giving us the MisShapes Award'...." [Vilage Voice]

"NYC-based DJ Stefan Lockdown, co-host of the beloved Tuesday weekly staple We Bite! party at Happy Ending, and winner of the PAPER Nightlife Award for Best New DJ along with other We Bite! host Spencer Product, passed away on Wednesday night. The cause of death, as far as I know, was a heroin overdose." [Shit Parade]

He died on Wednesday November 30, 2005. The funeral was Sunday. A note urging people not to use heroin, or at least to use it responsibly, was floating around MySpace with the funeral details. Someone forwarded it to me. Here it is:

Memorial:
Stefan's memorial service is going to be held in Washington Ct on this coming sunday 3m at the Washington Memorial Church. If you were a friend of his please make it out here. This would mean the world to his mother and brother.

The church that has been decided apon is a bit stuffy/ not what I think Stefan would have wanted, or maybe he would laughingly.. Please bring cards/ music/ anything to make this day more him.

also working on getting a place togethor for afterwards/ a bit more social/ play some of his music. ect