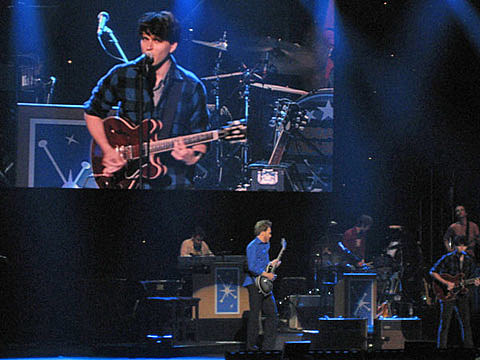 "Conan O'Brien brought The Legally Prohibited From Being Funny on Television Tour to Radio City Music Hall Tuesday night for the first of two performances. By far, the evening's highlight was the surprise appearance of Stephen Colbert, who came out onstage to rib O'Brien for leaving New York to do The Tonight Show in Hollywood...

...Their verbal tiff quickly escalated: "We're at Radio City, there's only one possible way to fight here," Colbert said with his face literally in O'Brien's face. "Anything that gets us to separate our noses and lips," O'Brien answered. "How about a good old-fashioned dance-off?" Colbert suggested. Cue "Pour Some Sugar on Me."

I would say Colbert was winning until he ruptured his hamstring. He was about to admit defeat when -- "Don't you dare, Stephen Colbert! Don't you dare! Don't you dare!" It was the voice of Jon Stewart booming from the back of the theater. (Even those of us in the last row of the second mezzanine who couldn't see him knew it immediately.) Stewart walked down an aisle to the stage -- wearing a red satin shirt, black pants, and a gold cummerbund -- as the audience exploded into a standing ovation. The fan reaction caught on the video says it best: "Holy f--ing s--!"... [EW]

Conan O'Brien was also joined by Vampire Weekend (good practice), Paul Rudd, and Bill Hadar at last night's show which was opened by Reggie Watts. Conan encouraged audience members to live tweet the show. Videos, including of the Colbert part, below...