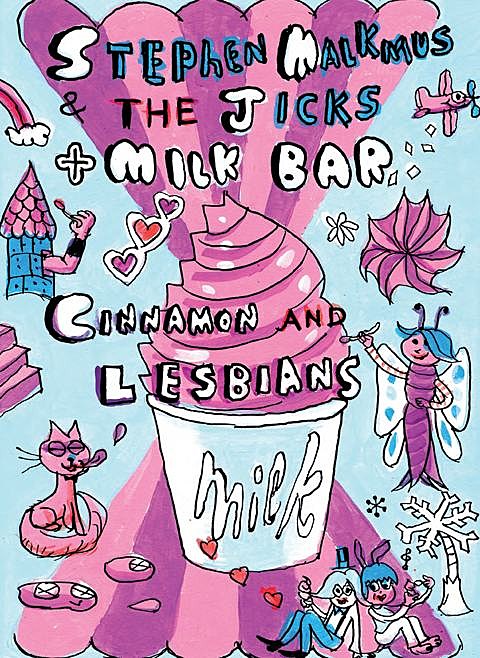 As mentioned a couple times at least, Stephen Malkmus & the Jicks' terrific new album, Wig Out at Jagbags, is out this week and they're in NYC for some release promotions appearances, including a in-stores at Generation (free with LP purchase) and Other Music (you had to win tickets). The Jicks (and SM) will also perform tonight (1/6) on Late Night With Jimmy Fallon, which doesn't have too many shows left. If you haven't checked out Wig Out at Jagbags yet, it's still streaming at Amazon.

You may also remember they've got a limited-run ice cream flavor at Momofuku Milk Bar based on their song "Cinnamon & Lesbians." The band will be stopping by the Williamsburg outpost (382 Metropolitan Ave @ Havemeyer) at 4 PM on Tuesday. It doesn't appear they'll be playing live, but they will be hanging out, eating ice cream (high temperature Tuesday: 14° btw) and signing copies of the poster above which was designed by Gary Panter (who did the Pee Wee Herman Show set among other things). The poster is free with ice cream purchase.

If that's not enough for you Stephen Malkmus & the Jicks will be back in February for two sold out shows.