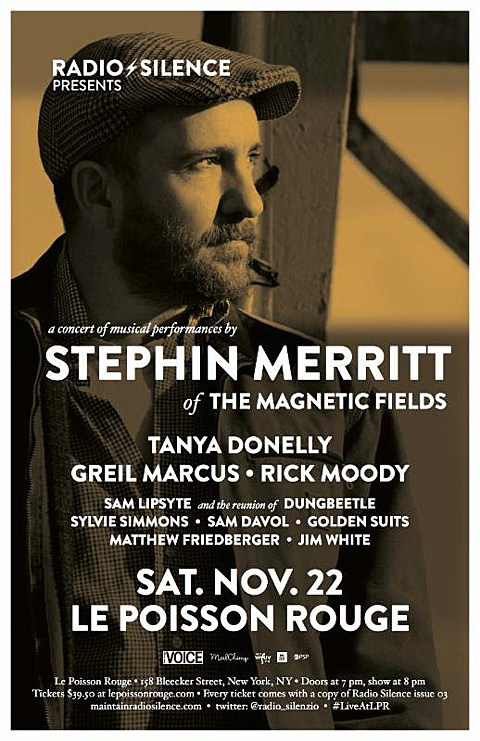 Radio Silence is a San Francisco-based arts magazine focusing on music and literature. To celebrate the release of their third issue, they're putting on a show in NYC at Le Poisson Rouge on Saturday (11/22) featuring notable talents from both: Stephin Merritt (Magnetic Fields, The 6ths) and Tanya Donelly (Throwing Muses, Belly) will be playing, while acclaimed rock critic Greil Marcus and author Rick Moody (The Ice Storm) will do readings. Plus: Sylvie Simmons, Sam Davol, Golden Suits, Matthew Friedberger (Fiery Furnaces), and Jim White.

Also on the bill, author Sam Lipsyte and a reunion of his late-'80s/early-'90s NYC art-punk band Dungbeetle. While the group are mostly a footnote (only one single released), one of their champions at the time was James Murphy who liked them so much he signed on as their sound guy and built his first studio with them in Dumbo. Said Murphy to NY Mag:

Tickets are on sale now and include a copy of the new issue of Radio Silence which features contributions by Lucinda Williams, Bruce Springsteen Carrie Brownstein, Ian Mackaye, Rick Moody and more.