Stereogum is co-presenting shows at Santos Party House now. Each week they'll "invite a guest curator to assemble a one-night-only lineup of performances and collaborations from sonic and visual art worlds". They kick things off tonight (3/3) with a night "curated by Lizzi Bougatsos (Gang Gang Dance, I.U.D.) and Sadie Laska (Growing, Actress, I.U.D.), featuring performances from Black Dice's Eric Copeland, DJ Matt Manderson (Neon Kobra Krew), Whitney Museum-celebrated video artist Alex Bag, and of course I.U.D. with Spencer Sweeney." "Tickets are $10 every week, with a recession-proof $5 reduction if you RSVP. It's a 21+ affair, so bring your ID. Buy all the tickets." The flyer that lists the lineups for every Tuesday night in March is below.

Speaking of Gang Gang Dance, don't forget they have a MoMA-related show coming up in NYC.

Dan Auerbach of the Black Keys played his first NYC solo (with band) show at Music Hall of Williamsburg last night. How was it? Find out tonight (3/3) when they do it again at Bowery Ballroom. Hacienda and Those Darlins are acting as openers and touring with Dan to Austin where Those Darlins will play a bunch of shows including the official BrooklynVegan SXSW showcase at Club DeVille on Wednesday March 18th (full lineup to get its own post any second now) and the My Old Kentucky Blog/Aquarium Drunkard party happening Peckerheads on Sixth the next afternoon.

Also playing SXSW (but not a BrooklynVegan party unfortunately): Luke Temple's new project Here We Go Magic., who, are also playing a show at Le Poisson Rouge in NYC tonight (3/3). 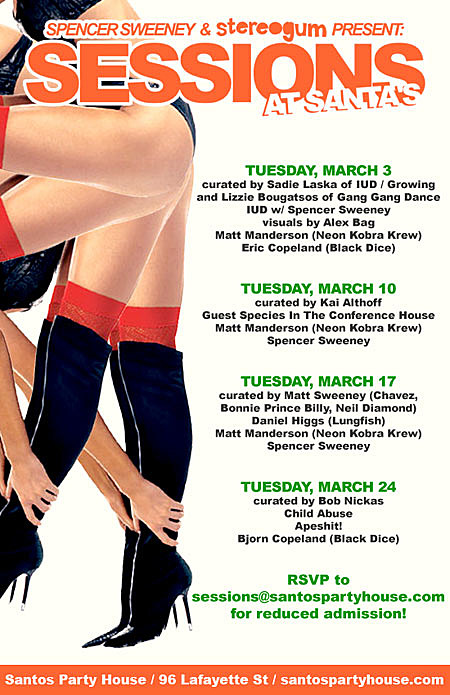