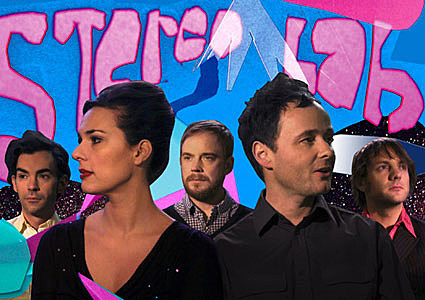 Stereolab are playing three nights in a row at Irving Plaza in NYC in October. Tickets are already on sale. The shows are part of a tour that will be in support of their new album Chemical Chords - out until August 19 in the U.S. and August 18 worldwide...

Pitchfork: How did you decide it was time for another album? It's been four years since the last full length, and two since the EP collection Fab Four Suture.

Tim Gane: The last bunch of records were just singles that became an album because the label wanted us to tour, and we thought we could compile those into an album. I was kind of bored of albums. But I did the singles anyway, just to mess about with things. Then I jumped into doing a soundtrack for a film [Marc Fittousi's La Vie d'Artiste]. I wrote quite a lot.

Straight after that, I began to work on the album. I was fresh to do an album, and I felt like I had lots of ideas. I felt it in my throat. I had ideas to just do lots of tracks, put them together, hopefully get the whole thing all together. In fact, it was quite weird. The soundtrack overhung by a long time. I thought that I would have six weeks to two months to prepare stuff for the album, and in fact, I had one week. In the end, it turned out quite well.