"I am quite happy none of them engaged me directly, because at least one of us would have regretted it." - Steve Albini 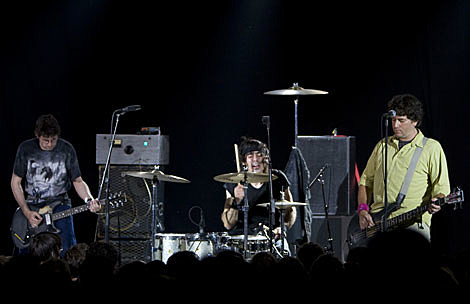 A guy named Steve crossed paths with a guy named Tyler. See what Steve had to say about said encounter below.

My band shared an airport shuttle with [Odd Future] in Barcelona. They piled onto the shuttle late, after finally getting corralled by their minder, who was nursing a head wound with an ice bag wrapped in a towel. They piled in, n*****ing everything in sight, motherfucking the driver, boasting into the air unbidden about getting their dicks sucked and calling everyone in the area a faggot. Then one of them lit a joint (or a pipe, I didn't look) and told the driver to shut the fuck up n***** and smoked it anyway. A female passenger tried to engage one of them in conversation, but he just stared at her with a dead-to-me stare while his seatmate flipped double birds in her face.

The whole trip they complained about not being at a McDonalds and repeatedly shouted for the motherfucker to pull over so they could get some fucking McDonalds n*****. Interspersed with the McDonalds requests were shouted boasts about how often they masturbated and fucked bitches n***** and got paid like a motherfucker fifty grand like a motherfucker. They continued complaining that the trip was taking too long and insisted they be fed immediately all the way to the airport, where their minder presumably fed them.

I am quite happy none of them engaged me directly, because at least one of us would have regretted it.

I am well aware, thanks, that good people can make ugly art and that ugly people can make good art. Ultimately the function of art is to express something and move an idea from one person to another, and the tools of that can include revulsion and discomfort. Having been in a few bands myself, thanks, I know that the uninitiated can mistake these devices as windows into the soul of the creator. Ultimately they are, of course, but not necessarily in the crude autobiographical way they are often interpreted.

I know all that, so I am never quick to judge a person based on a superficial reading of creative output. Peter Sotos is a lovely fellow whom I trust implicitly, despite his writing evoking a truly primal disgust in me, to use another rapey example. Michael Gerald from Killdozer said it best in an interview, when the journalist remarked that he seemed like a nice fellow, which was unexpected given that the characters in his songs are often repellent. "Oh, that's not us," he said, "that's the crazy people we sing about." In that light, I am one hundred percent behind Odd Future's right to rap about what they wanna rap about, and if she don't like it fuck her.

And also fuck me. It's none of my business what they wanna. I'm not part of the audience for hip hop, and as a non-dilettante I don't generally respond to it when I hear it, so I can't make any critical assessment of Odd Future's music on its own terms, but they go out of their way to make it clear that this is not a case of regular people making music about assholes, but assholes making music about being assholes. I have no time for that. I don't respond kindly to it when Ted Nugent does it either.

If the whole thing is a put-on, a bit of Vincent Gallo life-as-theater for the benefit of whoever happens to be sitting next to them, that's no excuse. It's being an asshole about being an asshole. [Electrical Audio]

Steve's band Shellac have an upcoming tour with TWO shows at The Bell House in addition to ATP NJ. Tickets are still available to both Brooklyn shows. Odd Future's upcoming tour includes a sold out show at Terminal 5.