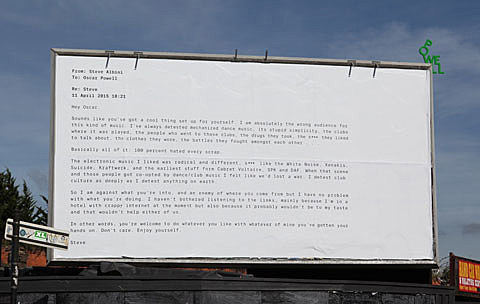 You may have heard about UK electronic artist Powell, who sampled Steve Albini from an old Big Black live recording and then politely emailed him to ask permission to use it. Albini replied saying that he "always detested mechanized dance music, its stupid simplicity, the clubs where it was played, the people who went to those clubs, the drugs they took, the shit they liked to talk about, the clothes they wore, the battles they fought amongst each other" but, without actually listening to the song, gave Powell permission, concluding with "Don't care. Enjoy yourself." Powell and his label, XL, then turned the full text of Albini's email into a 20ft billboard in London to promote the track, titled "Insomniac." That's a picture of it above.

Abini's text has also now become the basis for the "Insomniac" video which is a strobed out twist on the lyric video. The song itself is a blast of squelchy noise that Albini might actually not hate if he listened to it, given that he listed Cabaret Voltaire, SPK and DAF as the kind of electronic music he liked. (Big Black used a drum machine, it should also be said.) Powell told The Quietus that this is not a feud. "What's being lost on people is that it's being positioned as Powell against Steve Albini but it was never like that, it was me and Steve against stuff - without him I wouldn't be making this kind of music." You can watch the "Insomniac" video -- and read Albini's email to Powell -- below.

Steve Albini's email response to Powell...
Hey Oscar,
Sounds like you've got a cool thing set up for yourself. I am absolutely the wrong audience for this kind of music. I've always detested mechanized dance music, its stupid simplicity, the clubs where it was played, the people who went to those clubs, the drugs they took, the shit they liked to talk about, the clothes they wore, the battles they fought amongst each other... basically all of it, 100 percent hated every scrap. The electronic music I liked was radical and different, shit like the White Noise, Xenakis, Suicide, Kraftwerk, and the earliest stuff form Cabaret Voltaire, SPK and DAF. When that scene and those people got co-opted by dance/club music I felt like we'd lost a war. I detest club culture as deeply as I detest anything on earth.

So I am against what you're into, and an enemy of where you come from but I have no problem with what you're doing. I haven't bothered listening to the links, mainly because I'm in a hotel with crappy internet at the moment but also because it probably wouldn't be to my taste and that wouldn't help either of us.

In other words, you're welcome to do whatever you like with whatever of mine you've gotten your hands on. Don't care. Enjoy yourself.