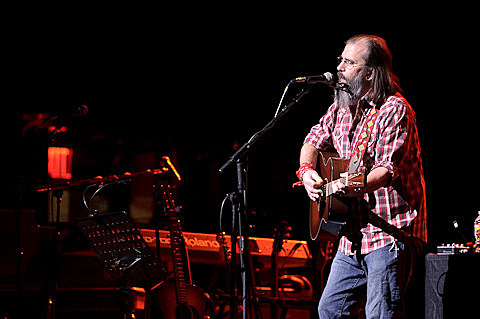 Steve Earle will head out with his electric band, The Dukes (and Duchesses) featuring Alison Moorer, for a string of tour dates in support of his new LP/novel I'll Never Get Out Of This World Alive. Kicking off in June, the dates include NYC twice: 9/12 at Music Hall of Williamsburg and 9/13 at Town Hall. Town Hall tickets go on sale on Friday 4/22 at 11AM, while MHoW tickets go on AmEx presale on 4/20 before going on general sale on Friday. All tour dates are listed below.

I'll Never Get Out Of This World Alive the album is due in 4/26, but the novel is due on 5/12 and "imagines the troubled life of Doc Ebersole as he is haunted by the ghost of his former patient and friend, Hank Williams". Earle is currently offering the first chapter from his new book as well as a download of the new song "Waitin' On The Sky" if you "like" him on Facebook.

More imminently, Steve Earle and Alison Moorer will also appear at the Beacon Theater on May 27th in celebration of Wavy Gravy's 75th birthday alongside Ani DiFranco, Jackson Browne, Dr.John, and many others. Tickets are still available.

Steve released a limited edition 7" on Record Store Day. Did you pick one up?

The A-Side is Earle's version of the Hank Williams song that is the title of both Earle's new studio album and debut novel, I'll Never Get Out Of This World Alive. The song was the last single released during Hank Williams' lifetime in December of 1952. The B-Side is Earle's celebrated original "This City" which has garnered both Emmy and Grammy Award nominations as it was written for HBO's Original Series Treme (in which Earle appears as a cast member). "This City" also closes Earle's T Bone Burnett-produced new album released by New West Records on April 26th. The 7 inch single is a hand-numbered edition of 2,600 copies on translucent red vinyl with black swirl. The cover of "I'll Never Get Out Of This World Alive" will be available digitally as a bonus track, and is exclusive in physical form to this 7 inch release.