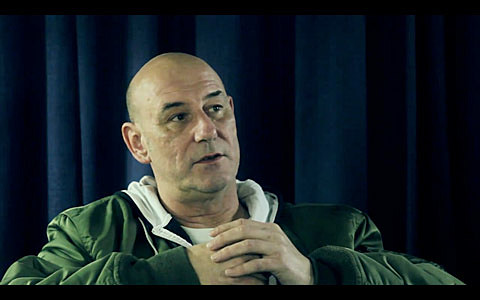 Daily Swarm: How have the preparations been going?

Steve Ignorant: The only the problem is the visas. Lots of forms to fill and I've got to go down to the American embassy and all that... but I should be okay. We've been practicing on and off since we finished Europe, really. That was in November. Actually this Friday will be the last rehearsals before we come to the States, so we if we don't know it by then, we'll never know it. The actual songs are okay, it's just the joints between the songs and remembering the order and making sure we know it backwards and inside out. We want to do as good a job as possible.

Daily Swarm: Who's in the band that's performing with you?

Steve Ignorant: I've got a different drummer from London, a guy called Spike T. Smith: he's performed with Morrissey and also with Conflict. I've also got Bob Butler on bass, and Gizz Butt on lead guitar. Steve Well isn't doing any it more - he was rhythm guitar - and we've got a different vocalist now for the female part, Carol Hodge from Manchester.

Steve Ignorant kicks off his previously discussed "Steve Ignorant performing Crass Songs" tour at Santos Party House on March 10th. That show is now sold out, but the punk frontman has scheduled another! Tickets are on sale now for Steve Ignorant at Don Hill's on March 26th with Goldblade. That now means Steve starts and ends the tour in NYC. All dates are listed below.

March 26th is a busy night for punk & metal fans. NYC will be flooded with a wealth of notable shows: Sick Of It All/Snapcase, Hull/Horseback, OFF/Trash Talk, and Nunslaughter/Disma just to name a few.

In a video interview, part of which makes its debut in this post, Steve discusses the tour and his frustration with the shows being billed as Crass shows. Watch that, with all tour dates, below....