Steve in his wild and crazy days 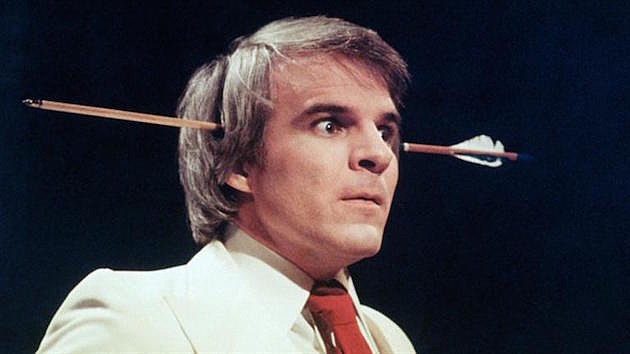 Jerry Seinfeld played the second of his monthly Beacon Theatre residency shows  last night (2/18), and he had an extremely special opener: Steve Martin.

Though he was only on stage for a very short set, this was Martin doing standup for the first time in 35 years. Martin joked that he lost a bet with Seinfeld. Jesse David Fox over at Vulture wrote down a couple of his jokes, which were pretty much classic, absurdist Steve Martin, like the one here:

By the way, I apologize for the ticket prices. [Pause.] I know it seems expensive, because there is like one guy, two guys, and a couple of mics, but it's not that way. There are like four sound people, and two lighting people, and [pause] drivers, and wardrobe people, and catering, and someone to walk Jerry's Fitbit around. [Pause.] A celebrity look-alike, in case Steve doesn't feel like going on. Steve says hi, by the way.

Seinfeld called it the thrill of his career, which makes sense. While we'd be surprised if this marks a regular return behind the mic, one can hope. In the meantime, check out a classic Steve Martin live set from 1978 below.