Steve Martin @ Rubin Museum in May (more by Ryan Muir) 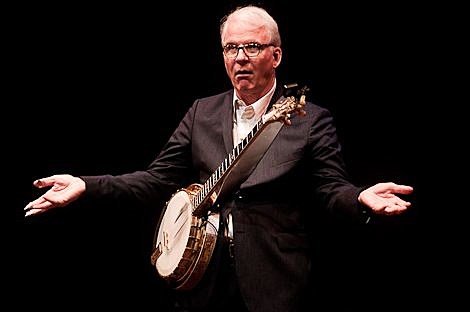 Years ago, in my old comedy act, I said, "You just can't play a sad song on the banjo." This was for comic effect only, because I knew the banjo had a capacity for mournful melodies and the "high, lonesome sound." As I was sometimes mournful, sometimes lonesome, and sometimes high, this suited me perfectly. I also found myself passionately affected by the banjo's driving staccato, darting rhythm, and inexplicable sadness. It was as though the banjo generated nostalgia for experiences I never had, joy I was yet to experience, and melancholy that was yet to come. [Steve Martin - Liner notes to "The Crow"]

The above is a selection from the liner notes for Steve Martin's first all-music album, The Crow: New Songs for the 5-String Banjo, which came out in May. A few weeks after its release, Martin performed with the Steep Canyon Rangers in a two-night run at the Rubin Museum. He'll be back this October, as part of a fall North American tour, with opening act Ralph Stanley & the Clinch Mountain Boys and the Steep Canyon Rangers again behind him. They play Carnegie Hall on October 6th (tix on sale) and NJ's Wellmont Theatre on October 14th (no ticket info yet).