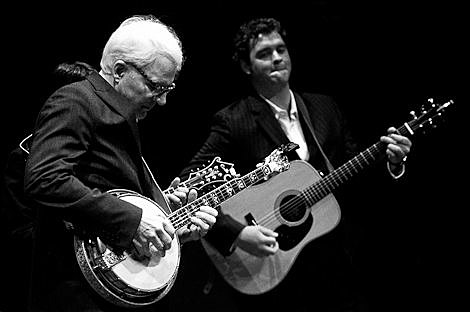 Below is a proper review of Thursday night's show to go along with Ryan Muir's pictures.... 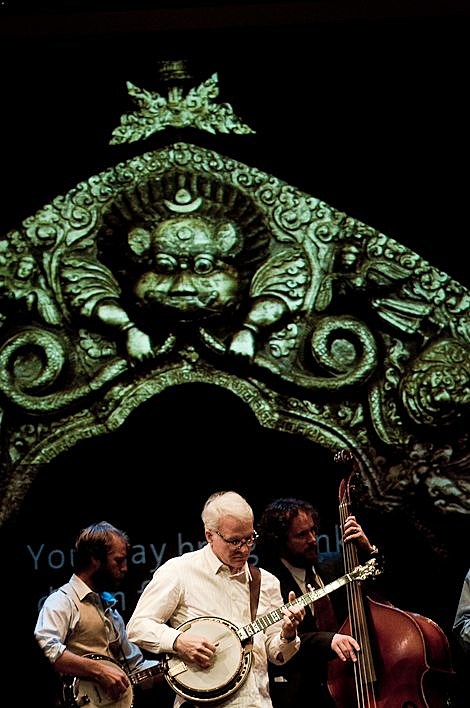 Steve Martin elected to dub his show A Tentative Evening Of Bluegrass, perhaps guarding in advance against the obvious tendency of his audience asking the question of whether a comedian is also allowed to play the banjo. Woody Allen has faced the same grilling over his clarinet abilities. This is always the way when an artist shifts disciplines, whether from acting to rock'n'roll, from rock'n'roll to photography, from movies to fashion design, from boxing to perfumery or from pop to porn. Martin recorded The Crow: New Songs For The Five-String Banjo in New Jersey, but you'd never guess. It's now riding high in the bluegrass charts.

Three not surprisingly sold-out shows over two nights at The Rubin Museum Of Art demonstrate his picking skills in a decisive fashion. This is a venue that insists on a regime of completely acoustic performance, and that stipulation is ideal for bringing the music right back to its absolute roots. Martin's fronting The Steep Canyon Rangers from Asheville, North Carolina, a youngish quintet that adopt the classic bluegrass formation of guitar (Woody Platt), fiddle (Nicky Sanders), upright bass (Charles R. Humphrey III), banjo (Graham Sharp), mandolin (Mike Guggino) and compulsory vocalising for all. The only element that isn't traditional is the presence of Martin himself, making up a two-banjo attack. But Sharp isn't here to shadow Martin, to support his untried skills. No. Often, the two are alternating phrases in call-and-response, or Sharp is sitting out whilst Martin plays lead. It's more like a twin-pronged soloist set-up. Martin is frequently right out front, spotlighting his fleet skills. He's not a hammerer, but more of a silvery skater.

Some of Martin's songs began their evolution over four decades ago, and have only been completed recently. He's been playing the banjo since he was a kid, and is a genuine enthusiast rather than a casual dilettante. Martin playing some intricate lead phrases, and offering the occasional vocal. His non-amplified projection skills are impressive, as he quips in-between songs. Martin might mock himself, the band, the audience and, indeed, the whole of existence itself, but once the music commences, a serious focus sharpens.

He considered the lyrics for "Daddy Played The Banjo" as bad poetry, but also the makings of a good country song. Martin's odd-tune-out is "Late For School", a racing comedy number where his vocals take centre-stage. There's also a tribute to bluegrass king Bill Monroe, with readings of "Orange Blossom Special" and "Sitting On Top Of The World" (not the old blues chestnut). The Himalayan-obsessed Rubin usually asks its visiting artists to pen a piece that's inspired by an exhibit in the museum, but Martin merely elects to switch "Saga Of The Old West" to "Saga Of The Old East". He's fighting the onstage heat, with persistent banjo tuning problems, which is all good fodder for wisecracks (the changing room temperature is generated by the audience's rapidly-shifting hot-then-cold attention-span!). The rapport between Martin and his Rangers is startling, even they've only been working together for a short spell. When Martin vacates the stage, leaving them to play a pair of tunes from their accustomed repertoire, it's a chance to hear how different their band personality can be when operating independently. These are more song-based pieces. Martin returns, and in the trusty way, everyone gets to step forward, delivering their solo flashes, all of them highly expressive. And then, out comes Tony Trischka for a three-banjo tussle, reprising his 2007 collaboration with Martin. This is prime entertainment, as parodic comedy chaos is grafted onto sheer musical substance. The compulsive charisma of Martin is witnessed at close range, his banjoman reputation is solidified, bluegrass music continues its re-revival and The Steep Canyon Rangers increase their profile immeasurably.

More about this show, with full picture set, HERE. 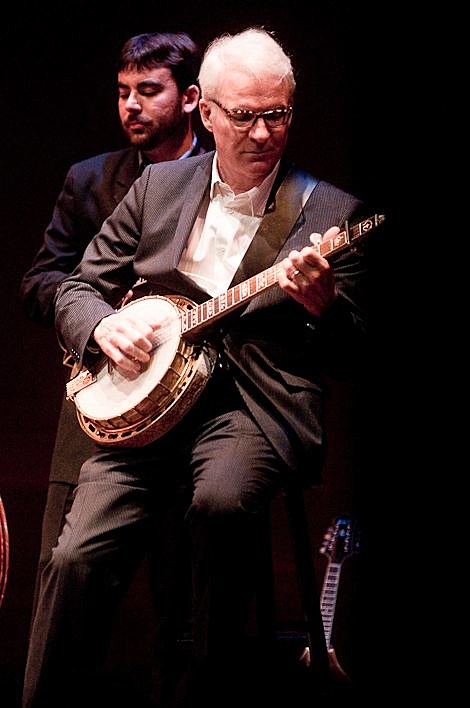