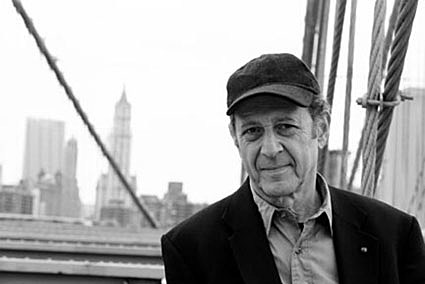 New York-based composer Steve Reich has won the Pulitzer Prize for music with his piece Double Sextet. Reich composed the work for two identical sextets of instruments, each made up of flute, clarinet, violin, cello, vibraphone and piano.NPR]

The award-winning piece was commissioned by new-music ensemble eighth blackbird, who toured with Double Sextet as part of their The Only Moving Thing program in 2008. That show visited New York's Zankel Hall at Carnegie Hall on Thursday, April 17th, 2008.

The second half of The Only Moving Thing was a new joint composition by Bang on a Can artistic directors David Lang, Michael Gordon and Julia Wolfe, called singing in the dead of night. Gordon's Trance is being performed at (Le) Poisson Rouge on Wednesday, April 22nd.

On May 20, BAM is hosting a screening of The South Bank Show: Steve Reich. The event, which also includes a reception and a Q&A with Reich himself, is free, but "exclusively for Friends of BAM".

More info on Double Sextext, with a NYT review of its debut and videos of eighth blackbird rehearsing and recording the piece below...

Mr. Reich's work is the latest in his series of scores for two or more soloists -- or, in this case, ensembles. The players have the choice of performing all the parts onstage or recording one set and playing the rest live. Most musicians take the second option, as Eighth Blackbird did: in any case the spirit of these works is bound up in the juxtaposition of real players and their simulacra.

Double Sextet, published by Hendon Music/Boosey & Hawkes (BMI), premiered by eighth blackbird on March 26, 2008 at the University of Richmond in Richmond, Virginia. The 22-minute work, completed in October 2007, is scored alternately for 6-piece ensemble ("Pierrot plus percussion": flute, clarinet, violin, cello, piano, and percussion) and pre-recorded tape or 12-piece ensemble. The Pulitzer citation describes the piece as "a major work that displays an ability to channel an initial burst of energy into a large-scale musical event, built with masterful control and consistently intriguing to the ear." [NewMusicBox]