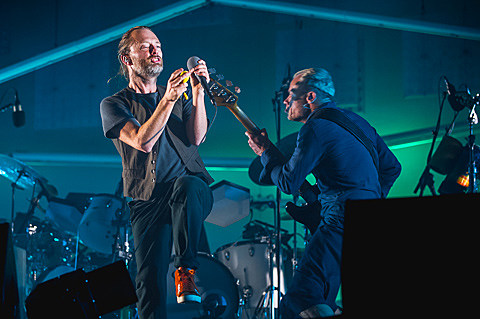 Contemporary composer Steve Reich has premiered multiple works in NYC in recent memory, and he's now announced the New York premiere for his Radiohead-inspired piece "Radio Rewrite.". Speaking to The Quietus (via Pitchfork) on the piece, Steve said:

The trip to Krakow and meeting Jonny Greenwood made me think, well, this music really interests me. What if I took these songs, 'Everything in its Right Place' and 'Jigsaw Falling into Place', and used some of the harmonies, some of the bass lines, some of the melodic material, but going my own way with it, using that material as a starting point, a stimulus. Sure enough, it worked. You know, you go where the energy is. So now there's about 15 minutes written out of a piece which will eventually be an 18, 19, 20 minute piece.

It's brilliant, absolutely brilliant songwriting. I saw a black and white video of them rehearsing 'Jigsaw Falling Into Place' and what struck me was not only that it was a beautiful song, but that the band are so committed. There's no showbiz, just musicians communicating very directly. There's no fudging that.

In both those songs, the chord sequences are very interesting, These are beautiful tunes and I can't improve on them, so I've written my own piece, but sometimes something comes to the surface which reminds you very clearly and sometimes not so clearly of what they do. I mean, it's scored for flute, clarinet, two vibraphones, two pianos, string quartet and one electric bass, which only appears in the first and last movement, so it's not at all a rock piece. Now, '2x5' is a piece that wears rock on its sleeve, so to speak, because it's written for those instruments, but in Radio Rewrite, if you didn't know the original material, rock & roll wouldn't cross your mind. You'd just think, "this is a piece by Steve Reich that I like, or don't like."

The piece, which, as mentioned, is based off Radiohead's "Everything In Its Right Place" and "Jigsaw Falling Into Place," gets its NY premiere on November 16 at the Metropolitan Museum of Art by the Alarm Will Sound ensemble, who will also be performing five other Steve Reich pieces. Tickets, which include museum admission, for the concert are on sale now.

If you can't make it, the show will also be streamed live at Q2 Music, starting at 7 PM.

More info and a video of Alarm Will Sound performing "Radio Rewrite" in California, below...