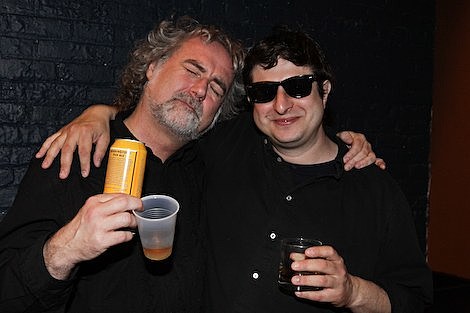 Bassists/guitarist Scott McCaughey and guitarist/bassist Peter Buck collaborate quite a bit. First, they both play in R.E.M. Recently, both backed Robyn Hitchcock as part of the Venus 3 on his spring tour. Those shows were a combination of opening dates for the Decemberists (like at Radio City) and headlining shows. The band's June 11th show at the Bell House was the latter.

McCaughey and Buck also play as the Minus 5. And, with Steve Wynn and drummer Linda Pitmon, they form the Baseball Project (appropriately, a group that composes baseball themed songs).

Wynn and Pitmon are prolific in their own right. Both just gigged as part of Steve Wynn and the Miracle 3, performing Medicine Show by Dream Syndicate (Wynn's old band) at the Bell House on June 27th. A live recording of that show is available at The Archive. (There's another of those Medicine Show gigs coming up in LA in July.)

The a-four-mentioned musicians pack into the tour van this August to play an amalgamated series of shows, billed as "An Evening with The Minus 5, the Baseball Project, and the Steve Wynn IV Performed by Scott McCaughey, Peter Buck, Steve Wynn and Linda Pitmon." Part of that will be a gig at the Bowery Ballroom in NYC on Wednesday, September 23rd. Tickets go on sale Friday, July 10th at noon.

If that's not enough, you can catch Buck on the recently reissued version of R.E.M's 1984 album Reckoning (though not McCaughey -- he didn't join the group till the '90s). R.E.M. are also releasing a 4-song live digital EP on July 9th, and a 2-CD live album later this year.

All Minus 5 + Steve Wynn + friends tour dates below...