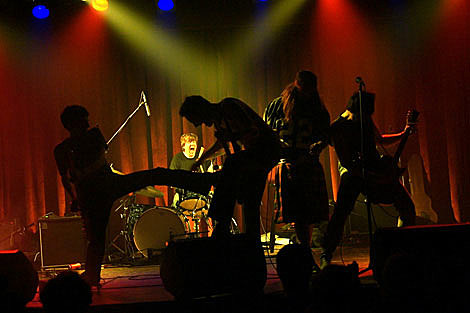 Former Guns N' Roses drummer Steven Adler would not hesitate to get back together with Slash and Axl, if that's what they decide to do, as Blabbermouth points out:

Asked about the persistent rumors of a reunion of the GUNS N' ROSES' classic lineup, Adler recently said: "I have no idea. Put it this way: I've known [former GUNS guitarist] Slash for 38 years, we've known each other. He knows damn well if he told me something that I would climb the highest mountain and I would be screaming it out for joy. So, if anything happens, I will be the last to know about it."

He continued: "I'm just glad that I had an opportunity in my life to achieve my dreams, to play with such great people and such talented people and make such a great record with those people. And just being a part of it, I'm happy. I could go to heaven right now and be happy."

Slash recently revealed that he and GUNS lead singer Axl Rose had repaired their estranged relationship after nearly 20 years, immediately leading to a storm of speculation about a possible reunion of the classic GUNS lineup.

Meanwhile, Steven Adler has been playing Guns songs on the drums with his band Adler. Video footage from a recent show at Mohegan Sun can be viewed below, "Night Train", "Sweet Child of Mine", and "Mr. Brownstone" included.

Speaking of Mr. Brownstone, the Guns N' Roses tribute band of the same name, who have broken up and returned many times (who was at their "final" show at Bowery Ballroom in 2006?), are BACK AGAIN for a drunken MIDNIGHT Halloween show at Baby's All Right (plenty of time to trick or treat before this Saturday night show starts). Tickets are available.

Mr. Brownstone, known as the world's drunkest Guns N' Roses cover band, have been BrooklynVegan regulars for over 9 years, have shared members with Clap Your Hands Say Yeah and Satanicide, often return for holidays, and once actually got themselves on Letterman (Letterman's worst band ever?) . The above photo by Tim Griffin comes from their 2009 Eugene Mirman book release party performance at the Bell House. Halloween at Baby's will be their first show since New Year's Eve at Mercury Lounge... Will it be their last?

Those videos of ADLER are below...