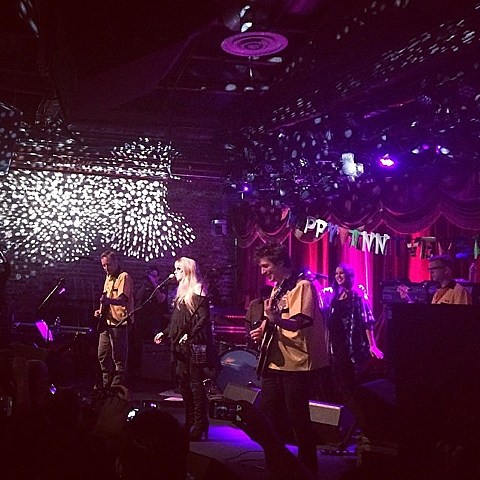 The most exciting appearance of all happened the night of New Year's Eve though, with Stevie Nicks joining the band to perform her classic "Rhiannon" from Fleetwood Mac's self-titled 1975 album. Watch a video of that below.

Also on stage for that song was Deer Tick frontman John McCauley's mom, and his 9 months pregnant (!) wife Vanessa Carlton who has toured and collaborated with Stevie before. Stevie also officiated John and Vanessa's wedding.

Meanwhile, Fleetwood Mac -- currently with their classic lineup of Christine McVie, John McVie, Mick Fleetwood, Stevie Nicks and Lindsey Buckingham -- are returning to the NYC-area soon on their 2015 tour which hits MSG on 1/22, Atlantic City on 1/24, Nassau Coliseum on 1/25 and Prudential Center on 2/8 (tickets). This may be your last chance to see them though. The Guardian points out that Lindsey Buckingham told PBS that their 2015 tour and the new album they have planned (their first since 2003) will be their "last act." Lindsey also spoke about his collaborations for the album with Christine McVie, who recently rejoined the band for the first time since 1998, calling them "the best songs we've co-written in years."