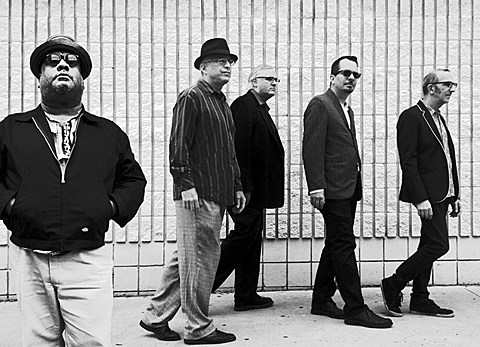 A decade ago, Stew (of The Negro Problem and the Tony-winning Passing Strange) teamed with LA prog/surf instrumental combo Double Nought Spy Car to make an album together funded by the American Composer's Forum. The record, titled Panorama City, had a few guidelines: "create instant songs, no rehearsing, no second takes, no jamming." Stew explains further:

K, I cheated, as I had written down a few lyrical fragments that morning in a notebook which I sang from. But the best lines I promise you came to me via the spell the music cast that day in Panorama City, powered by G-d and conjured by the law firm of Lacques, Doten, Watkins and Berardi. I think the best compliment that we could be paid is by the people who don't think it was all totally improvised. But it was. No stops and starts, no overdubs, no previously agreed upon anything. It's a very Californian vibe, a nice combo of trust and confidence, old-heads, new strings, and damaged musical psyches with enough pop sensibility still left in their Don Kirshnerized-Aylerian DNA to party, a deeply satanic-Buddhist mushroom cult that exists only as long as the record button is depressed but seeking help. We let this music sorta hang out on a shelf for way too long and yet it seems like now is the perfect time to listen to it ... from a safe distance. Releasing records is the best revenge and our mad way of loving you.

Due in part to Passing Strange's success, the album got backshelved but is now coming out April 14 via 11 Foot Pole. Its 10 tracks are distillations of the sessions into song-length form, but there will be a digital-only release of the entire four-hour session. You can stream three tracks from Panorama City, including "Blowoff Therapy" which premieres in this post, below...