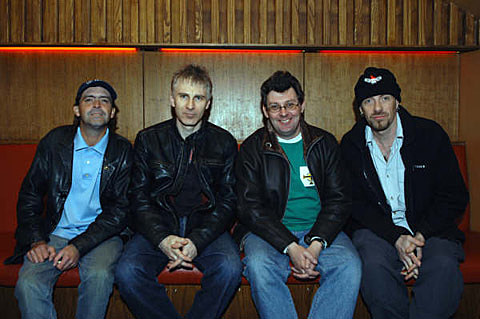 Irish punks Stiff Little Fingers (Ian McCallum, Steve Grantley, Jake Burns, Ali McMordie) will swoop into the US to play dates including a few on the East Coast. Boston, DC, and Baltimore will all get attention, but NYC will get it twofold: June 2nd at Europa and June 3rd at Gramercy Theater. Tickets are on sale for the Europa date as well as Gramercy Theater.

Falling square in the middle of the tour is the band's appearance at Punk Rock Bowling in Las Vegas on 5/28, where the band will be joined by the likes of Descendents, Cock Sparrer, Killing Joke, The Dwarves, Bouncing Souls, and many others during the three day festival (5/28 - 5/30). Some tickets are still available for the third night, featuring Cock Sparrer.

Stiff Little Fingers "are working on a new album, the first since 2003's Guitar and Drum! Three new songs "Liars Club, "One Man Island" and "Full Steam Backwards" have debuted live." See them live at one of the tour dates below...