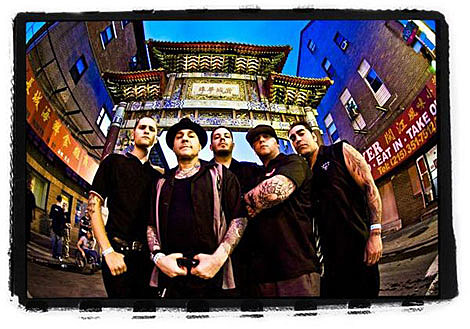 Vinnie Stigma, guitarist, hardcore monument, and philosopher extraordinaire, has gone solo from the legendary hardcore crew Agnostic Front (temporarily), releasing his debut album New York Blood as Stigma for I Scream Records. In celebration, Mr. Stigma will lead audience chants at two NYC shows including an in-store at Generation Records on Feb 26th at 7PM and a second show at The Pyramid on Ave A on March 1st. Full tour dates are below.

The record comes only a month after the release of New York Blood THE MOVIE on DVD:

The latest project from writer, director, cinematographer Nick Oddo is a criminal slice of life starring Vinnie Stigma, guitarist of the legendary hardcore band Agnostic Front. Heavily-tattooed Vinnie (Stigma) is a mid-range mobster who works the streets of Manhattan's Lower East Side with various schemes, including up-and-coming boxers, Chinatown drugs and opening a new nightclub. Vinnie's father Lorenzo (Marvin W. Schwartz), has just been released from Sing Sing after a 12 year stint, and the only thing on Pop's mind is getting revenge... The laid back, rambling script mostly follows Vinnie, and sometimes Lorenzo, throughout their daily routine, capturing the rhythms (and occasional roadbumps) in Vinnie's life, as he juggles a young son and an ex-wife with his coke snorting criminal ambitions. But while Vinnie keeps a relatively level head when it comes to crime, Lorenzo is a major psychopath who's liable to ruin everything his son has built...
- [Shock Cinema]

Stigma playing a tattooed tough guy from the LES. Hmmm. How do you suppose he prepared for that role? Trailer is below.

In other AF related news, the band is currently on tour, but announced that they are on the hunt for a new drummer... contact at their MySpace if interested. Roger Miret's (AF)'s brother band, Madball, also recently added some tour dates with Reign Supreme, though none in NYC. Full AF & Madball dates are below.

In other NYHC news, Subzero have announced they are calling it quits after a twenty-year run:

We will be playing a few more shows through out different regions of NY and out of state before we end it. Our first is @ Popeyes Pub in Westchester, NY with Jasta on FEB 27th and then In Brooklyn @ Europa with The Casualties & The Krays for the A CLOCKWORK ORANGE FEST. That's the last time you'll be hearing The Suffering Of Man / Necropolis set. Then we'll be going out with a bang at the SUPERBOWL OF HARDCORE aka BLACK N BLUE BOWL @ STUDIO B in Brooklyn MAY 30th. There we will be reforming as the ORIGINAL band doing a strictly OLD SCHOOL set. All the demo and HAPPINESS WITHOUT PEACE classics. You don't want to miss any of these shows! Thanks for the good times and the memories! COURAGE! STRENGTH! PRIDE! LIONHEARTED!!!!!

That Europa show, scheduled for March 15th is FREE and the show is all ages. Full tour dates are below. As more details on the Superbowl of Hardcore trickle out, we'll let you know.

Tickets for the Cro-Mags show at Europa on Mar 29 are still available.

New York Blood Trailer (NSFW, not for the fainthearted)

* w/ JASTA (HATEBREED) PALEHORSE, THE WORLD WE KNEW & more
** w/ THE CASUALTIES, THE KRAYS and many more