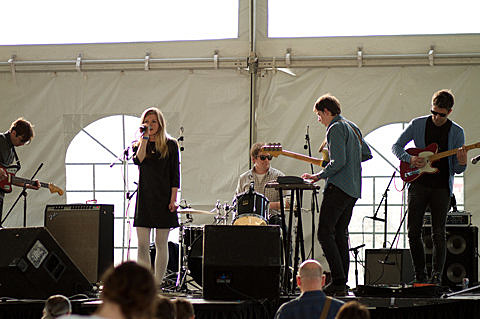 As befitting their autumnal sound, Still Corners' debut album, Creatures of an Hour, is set for release October 11 on Sub Pop. Later that same week, the UK act will start a fairly extensive North American tour which will roll into NYC on October 20 and 21 for this year's CMJ festival. Exact details of their CMJ shows is still TBA but the rest of the tour is pretty much set and all tourd ates are at the bottom of this post.

Also at the bottom of this post is a download widget for Creatures of an Hour's first single "Cuckoo," an icy blast that is pretty representative of Still Corners' sound. (You can download some older tracks above.) I've seen them a few times now, at Glasslands and a couple times during SXSW -- including BV's official Dot Com Day Stage show:

They sounded fantastic: part '60s soundtrack music (Barry, Morricone), part psych pop (Strawberry Alarm Clock, VU) and a big dose of motorik Kraut, as heard in a very Neu!-esque instrumental. Guitarist Leon Dufficy is a vintage man, be it fashion (Jarvis via Cecil Beaton) or his arsenal of pedals (he's got a vibrato worthy of Portishead); singer Tessa Murray would've been a perfect Warhol superstar. The rhythm section right in the pocket. Still Corners know exactly what they're aiming for and have pretty much hit the bullseye.

Their psychedelic visuals (very Joshua Light) add a lot to the performance, which wasn't always evident at SXSW but shouldn't be a problem for this tour.

All Still Corners tour dates and that download widget are below.