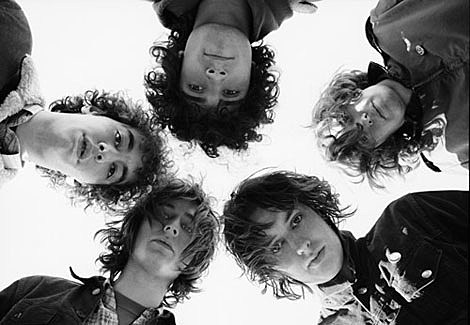 "Just got off the phone with Julian Casablancas and he confirms that the Strokes will indeed be headlining Lollapalooza this summer as first reported here a few weeks ago.

He says he's pretty stoked about the band's string of festival dates this summer. "We're getting the biggest offers of our career," he says. "It feels great, because I remember people writing things like 'We'll see if they're still around in 10 years' when we first came out."

...Casablancas says the Strokes are wrapping up their fourth studio album, and first since 2006. "I think it'll be out in September," he says. "I've written a lot of melodies for it, but the other guys have also contributed a lot more: melodies, choruses, parts. It's way more collaborative. So it'll have a different feel than our other albums." [Chicago Tribune]

The Tribune lists other probable headliners for Lollapalooza, happening Aug. 6-8 in Grant Park, as Lady Gaga, Arcade Fire,Soundgarden, Green Day and Phoenix. Some of those were listed by The Daily Swarm in February. Early Bird tickets to the fest are sold out - regular advance tickets are on the way.

The show in Chicago can be added to the Strokes' upcoming gig at Isle of Wight Fest in England this June.

Julian's upcoming tour dates include a show at Irving Plaza in NYC and a March 30th show at Sayreville, NJ's Starland Ballroom.