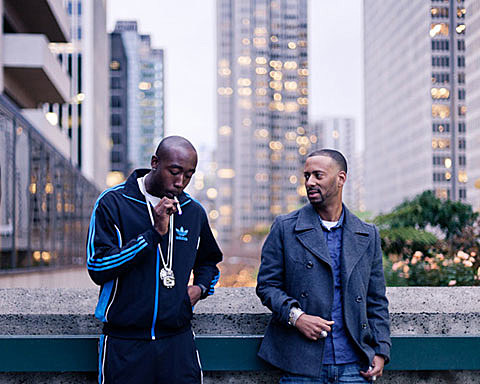 "Celebrating its 15th anniversary this month, Stones Throw is a Masada for those who never sold their turntables. There's an unspoken compact between the label and those who love what Madlib called "the old music." Collectors. Romantics. Sentimentalists.

"Our releases have always been whatever and whoever I've liked, whatever makes me excited at the time," says Peanut Butter Wolf, Stones Throw's founder and resident Wonka. Wearing a gray porkpie hat and T-shirt, the San Jose-born Chris Manak looks a decade younger than his 42 years. "It's all outsider music."

In the upstairs offices -- made up of four large rooms and a small studio -- a pencil sketch of Manak's late musical partner, Charizma, is framed above his desk. It starts a mini Stones Throw wall of fame, including the label's most iconic artists, the late J Dilla, Madlib and MF Doom. To a generation of underground rap fans, the trio might well be Mount Rushmore, a holy trinity that has accounted for six of its seven top-selling records in the United States: Madvillain's Madvillainy; J Dilla's Donuts and Ruff Draft; Jaylib's Champion Sound; and (Madlib alias) Quasimoto's The Unseen and The Further Adventures of Lord Quas. (The seventh is Mayer Hawthorne's A Strange Arrangement.) Madvillainy, the top seller, has moved just north of 150,000 copies." [LA Weekly]

Stones Throw is celebrating their 15th anniversary at the Exchange in LA on 12/22.

Madlib isn't currently on the bill, but he just played an LA show at the Echoplex on Saturday night (12/10). A few weeks earlier Madlib played a show in San Francisco with Freddie Gibbs who he just released a collaborative EP with. Listen to "Thuggin'" below. Stay tuned for a full album in 2012.

Look for the EP at the merch table at Music Hall of Williamsburg on January 18, 2012. Madlib is headlining the Brooklyn venue with a DJ set that night. Tickets go on sale Friday.

Stones Throw signee The Stepkids play Knitting Factory in Brooklyn four days earlier. Tickets are on sale. All Stepkids dates are listed below...