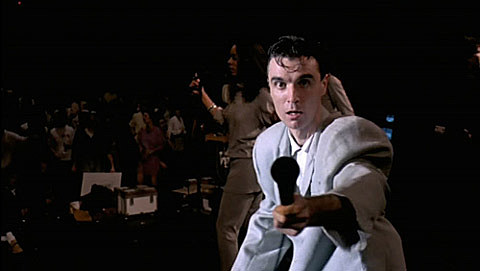 This year marks the 30th anniversary of Johnathan Demme's classic Talking Heads concert film Stop Making Sense, and the film has been making the rounds at various screenings around the country and was just released on Blu-Ray. The film will screen as part of Lincoln Center's Sound + Vision Festival at the Walter Reade Theater on August 1, to be followed by a Q&A with David Byrne himself. File this one under 'not to be missed.'

Tickets are sold out, but If you'd still like to go we have two pairs of tickets to the Lincoln Center screening to give away. ALSO one of those two winners will also be getting the new Blu-Ray of the film SIGNED BY ALL FOUR MEMBERS of the Talking Heads. Details on how to enter the contest, plus a few clips from Stop Making Sense, below...

======================
For a chance at winning a pair of tickets to see STOP MAKING SENSE AT LINCOLN CENTER OR AN AUTOGRAPHED COPY OF THE BLU-RAY: either tweet something that includes both @BrooklynVegan AND "STOP MAKING SENSE" in the tweet, or send an email to BVCONTESTS@HOTMAIL.COM with the subject line "STOP MAKING SENSE". Include your first and last name in the email. We'll pick two ticket winners at random (one will also get the Blu-Ray) and contact them with more details. If you enter by email, it will not be shared with anyone else. Good luck!
======================