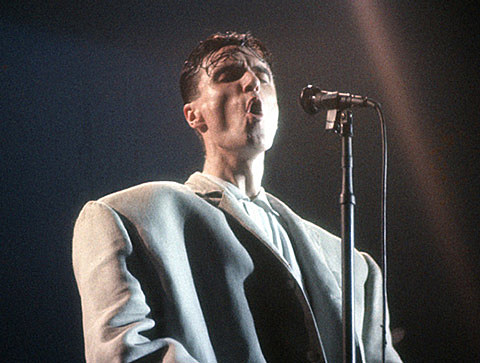 It's the 30th anniversary of Talking Heads' seminal concert film Stop Making Sense. The 1984 film, directed by Jonathan Demme, captured the band during their Speaking in Tongues tour over the course of three nights at Hollywood's Pantages Theater. Shot with long takes that really emphasize the performance, it's still a thrill to watch.

If you've never seen it, Stop Making Sense is getting its first ever digital release on July 15 for your downloading pleasure. It will also get a theatrical rerelease this summer. As mentioned, you can see it in NYC at BAM Rose Cinemas on June 4 at 7:30 PM which will be followed by a Q&A with Demme. It's part of the RadioLoveFest and tickets are on sale now.

You can also buy it on DVD and Bluray -- the 25th Anniversary Edition contains performances of "Cities" and "Big Business/I Zimbra" that aren't in the final cut of the film, plus a great audio commentary featuring all four members of Talking Heads and Demme. Still, it's great to see Byrne's Big Suit in a big theater.

All Stop Making Sense screening dates are listed, along with a couple clips from the film and its original trailer, below...