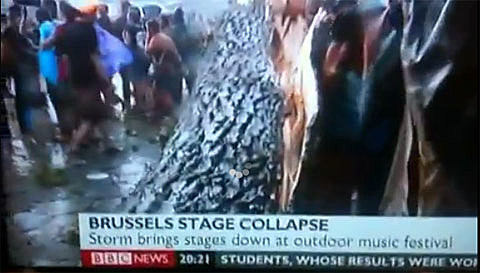 The Belgian music festival Pukkelpop Festival was hit with a severe storm today, which appears to have hit during or around the time of the Smith Westerns' set. Frontman Cullen Omori intially tweeted "Stage collapsed max almost got crushed by the tress. I hope pukkelpop has insurance bc all our shit is broke," but has since deleted it and followed up with, "Apologize to anyone who mistook tweet. Wrote direclty after running off stage. Just found out the extent of damage. All of prays go out to those hurt."

According to the Associated Press:

A storm swepts through an open air music festival in eastern Belgium on Thursday killing at least three people and injuring over 70 others, an official said.

Video from the site showed stage equipment dangling in high winds near the town of Hasselt, about 50 miles (80 kilometers) east of Brussels, as rain-soaked concertgoers at the Pukkelpop music festival ran for cover .

More than 20 ambulances were dispatched to the festival ground outside of Hasselt, a small town in eastern Belgium.

Hugo Simons, Hasselt's head of emergency planning, told VRT radio that 11 people were severely injured while 60 sustained light injuries as a result of the storm.

Hilde Claes, Hasselt's mayor, said those injured are taken to several nearby hospitals. Some of those lightly injured were being treated at a local sports complex.

Chokri Mahassine, the organizer of the festival, said "we have for now put the festival on hold until we understand the situation completely."

Dutch NOS television reporter Rick Hoogkamp, who was attending the concert, said the sky got dark, winds picked up violently and hailstones pelted those gathered.

The festival's website lists a number of stages where concerts and performances were to be held during the three-day event, which started Thursday. Reports say some 60,000 people are attending the event. [ABC/AP]

All details are still not known and are being updated frequently as the news learns more details. Other bands scheduled to play the fest today are/were Foo Fighters, Thirty Second to Mars, Fleet Foxes, James Blake, The Streets, Chromeo, Battles and many more.

Stories like this are sadly and frighteningly becoming a common thing, seeing as a stage collapsed at Ottawa Bluesfest during Cheap Trick (who coincidentally play Brooklyn tonight), another one collapsed at Indiana State Fair, a camera boom fell during OMD's SXSW show, and The Flaming Lips experienced a similar disaster at the Brady District Block Party in Tulsa, OK earlier this month.

Our condolences to the family and friends of those who lost their lives and to the injured in Belgium. A video about the incident is at ABC's website, and there's two that showed up on Youtube already, below...