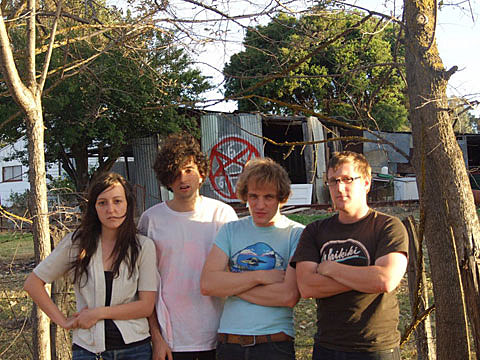 "The Straight Arrows play no frills spazz rock and have grown up on a healthy diet of the Ramones and Hüsker Dü, culminating in a fearless, boozy punk. They used to play on the scungy fringes of Sydney's live scene and have since released several fuzzy 7" records. They didn't need an intro [at Manning Bar in Sydney in February] and didn't waste their time with one. They exploded on stage, stabbing the fret boards and punching out stripped back songs at ridiculous volume. It was about texture, not content. Loud, abrasive, loose, obnoxious, immature and really, really good." [Faster Louder]

Like fellow Sydney band Royal Headache, Straight Arrows will tour the United States in September around an appearance at Memphis' Gonerfest. Beginning and ending in NYC, they'll visit Cake Shop on September 5th and Death By Audio on September 30th. The Brooklyn show is with Deaf Wish, PC Worship and Home Blitz who also play Ding Dong Lounge on September 10th with Royal Headache.

All dates on the tour don't have venues yet, but they are listed below...