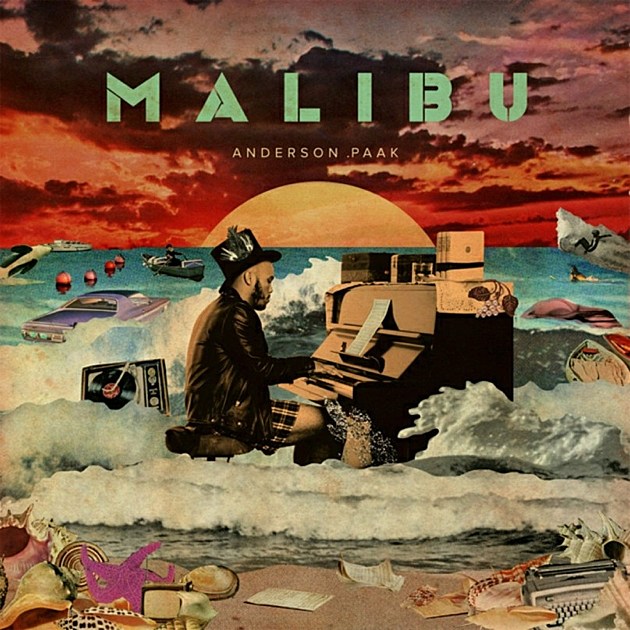 Dr. Dre has always had a way of finding a relative unknown to feature on his albums, who ends up getting a lot bigger in their own right a year later (you know, like Snoop Dogg). When he released Compton last year, it seemed like the breakout star of the album was going to be Anderson .Paak (who has a major presence on six of its tracks), so it's very satisfying to know that Anderson's first post-Compton album is here and it's fantastic. It's called Malibu and it's out today (order yours), and you can listen to it via Spotify below.

Dre's not on the album but it's very much in the same world as Compton, and even more accurately, it's in the same world as Compton contributor Kendrick Lamar's To Pimp A Butterfly. Guest appearances come from Rapsody, who's got a standout verse on TPAB, and she shows up with just as much fire here. Kendrick's Black Hippy groupmate Schoolboy Q is his usual crazed self on early single "Am I Wrong." Compton guest BJ the Chicago Kid surfaces again here on "The Waters," a track with keys by TPAB contributor Robert Glasper. And there's The Game, whose own career got a major push from Dre a decade ago and who sounded in great form on Compton, as he does here. (Other notable guests include Talib Kweli and producers 9th Wonder, Madlib, Kaytranada and Hi-Tek.) It's also got a similar approach to To Pimp A Butterfly in the way it fuses modern hip hop with old soul and funk, and like that album, it sounds alive. The basslines are legitimately funky, the drums are hopping, and Anderson himself sounds unpredictable and off-the-cuff much in the way Kendrick does. With his delivery that's usually somewhere between singing and rapping, he also often recalls Chance the Rapper.

Malibu has 16 songs that clock in at just over an hour and it doesn't have one bad track, but an especially great one is the most recent single "Come Down." Hi-Tek samples "Hatikvah" for it, which is an unlikely yet very successful source for a funk/rap hybrid, and Anderson's shouted "I might never come down!" is Malibu's most instantly-sticky hook. I'd recommend just diving into the album start to finish, but if you want a quick taste of it, start here.

The album comes out right on the heels of last month's Link Up & Suede, the debut EP from NxWorries, Anderson's duo with Kxwledge (who's also on To Pimp A Butterfly). Anderson also has some shows coming up, including Coachella and NYC on January 25 at SOB's (tickets). All dates are listed, with the Malibu stream, below.