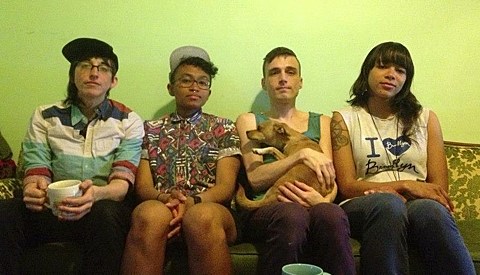 Brooklyn's Aye Nako have been playing locally a lot since forming in 2010, and they just finally got their debut album, Unleash Yourself, out this year, which they played a release show for at Silent Barn in May. Similarly to recent albums by Big Eyes, Swearin', or Radiator Hospital, it's total pop punk but with an indie pop/lo-fi approach that's very much been in style lately. Not to say they're bandwagon jumping or anything though, this is one of the better debuts to come out of the Brooklyn DIY scene this year.

Like I said, they play around a lot (like at Living Gallery last night [7/9]), but at the moment their only scheduled date is a recently-announced show at Glasslands on September 7. Tickets for that show are on sale now.

Stream Unleash Yourself in its entirety below...