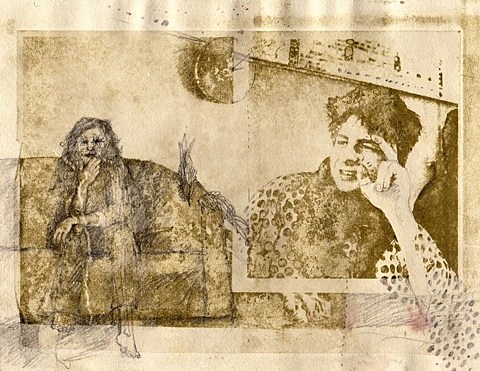 Portland, ME husband and wife duo Big Blood (aka Caleb Mulkerin & Colleen Kinsella) have been making truly eccentric psychedelic folk for almost a decade now. They have countless releases that make use of genuinely raw production and several sounds and instruments that fall outside of the typical "folk" spectrum. If you haven't heard their stuff, perhaps you've heard Caleb contribute similarly raw production to O'Death. Or maybe you've heard both Caleb and Collen contribute accordian, vocals, dulcimer, guitar, piano and more to Swans' 2012 album, The Seer.

This year, Big Blood released two full-length albums, Double Days I and II. Between the two albums, they put out 16 original songs and covers of Black Sabbath's "Planet Caravan," The Cure's "Disintegration" and Francis McPeake's folk standard "Wild Mountain Thyme" (which Joan Baez, Judy Collins, The Byrds, Bob Dylan and many more have recorded). It's perhaps needless to change that they change up all three of those covers a lot, and Big Blood's versions fit right in with the duo's own unique sound. If you haven't heard these albums, they're really worth checking out. You can stream both below.

Big Blood don't have a tour or a NYC show scheduled at the moment, but the one show they do have coming up this weekend is pretty close to NYC: Jersey City's WFMU Monty Hall on Saturday (7/25). That will be opened by Human Adult Band and Picastro. Tickets are on sale.