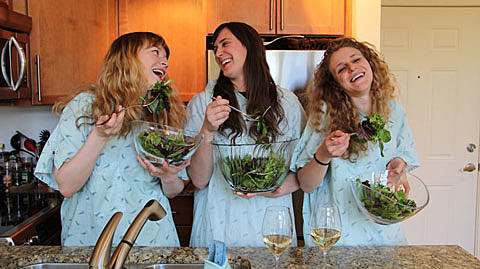 Childbirth's 2014 song "I Only Fucked You As a Joke" (from their self-titled tape) was a hilariously mean shoutalong insta-classic. The band, made up of Julia Shapiro (Chastity Belt), Bree McKenna (Tacocat) and Stacy Peck (Pony Time), return with their second album, Women's Rights, which is out today via Suicide Squeeze. It delivers 13 razor-sharp jabs, lampooning everything from the state of online dating ("Siri, Open Tinder"), the plusses of dating the newly wealthy ("Tech Bro"), "cool moms" ("Cool Mom"), doing coke at a baby shower ("Baby Bump") and so on.

A friend of mine from Seattle calls it the funniest thing out of the city since the heyday of the Young Fresh Fellows and like them, Childbirth do it without coming off novelty. There are a couple cheap jabs ("Breast Coast" pokes fun at vapid lyrics of certain indie bands) but overall, Childbirth deliver pointed barbs but also some serious punky hooks. You can stream the whole thing via NPR or Rdio, below.