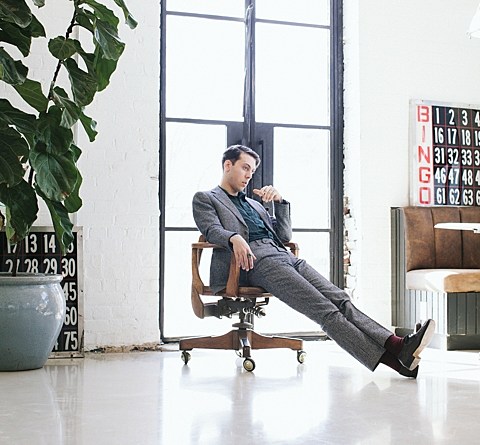 You've already heard two songs off Canadian country singer Daniel Romano's upcoming album, If I've Only One Time Askin', and now we've got a stream of the whole thing ahead of its official release (this Friday, 7/31, via New West Records). Earlier today, we talked about how some 'mainstream' country is having a bit of a moment in the 'indie rock' world. But if you're not familiar with Daniel's music, know that this is not that. He's talked before about how despite loving country as a child, he ditched it for punk rock as a teenager. He came back to country in his 20s, and when he speaks about his influences, he's probably going to bring up songs from the 1940s to the 1960s.

Daniel's music isn't really revivalism either though. If I've Only One Time Askin' doesn't actually sound like it could've come out half a century ago. Production-wise, it's more like a modern indie rock record. (Which makes sense -- we've mentioned before that he formed a label with a member of the Constantines and has collaborated with former Eric's Trip member Julie Doiron.) On this album, Daniel just keeps things raw and real like the outlaws he looks up to, and he puts a lot of attitude in these songs. You can and should check the album out for yourself. It premieres below.

Daniel's on tour now, and he hits NYC this Friday (7/31) at Rough Trade. That show is being opened by Wild Leaves. Tickets are still available.

Full list of dates, with the album stream, below...