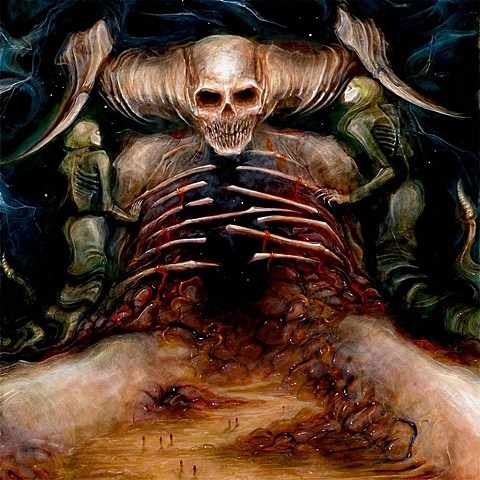 Philly death metal classicists Horrendous are back with Anareta, the follow-up to last year's standout Ecdysis. Anareta marks a further step forward for Horrendous. They still write some of the tightest, most cerebral songs in metal, but this record is even more accessible than Ecdysis, and just generally more packed with great material. That might sound like code for "less heavy," but fear not, this is pure crushing death metal to the core. It's just that Horrendous has become that rare metal band, and even more rare death metal band, that marries high-level musicianship to catchy songwriting in a way that can appeal to both metal die-hards and more casual fans of rock n' roll.

Simply put, Anareta is catchy as hell, and armed with killer guitar solos and an advanced sense of melody. This was often the case on Ecdysis, but now even more so. Over the course of the album, the band just continue to bust out riffs that make you grimace with delight. They have a masterful control of rhythm and dynamics and they know just when to pull the rug out from under you or to hit you in the gut with a killer groove. There's no fat on this thing, just great song after great song.

The band still sounds like they worship at the altar of early '90s death metal, with Death and Heartwork-era Carcass probably the biggest points of influence. But they don't get bogged down in idol-worship; the cleanliness and relative simplicity of their sound highlights a progressive and thoroughly modern sense of composition. They also get that a lot of great death metal can be really sad, and despite the guitar heroics and general badassery that Horrendous deliver in spades, that sense of genuinely felt emotion is what they manage to hit on a lot of these tracks. "Ozymandias" soars in a way that death metal rarely aims for, let alone achieves, with a climax that conjures some serious emotion. "Acolytes" is good old-school death metal crush until it becomes a nearly arena-ready major-key jam for the outro. And "Siderea" is a beautiful curveball, a swooning, swaying instrumental that feels like it encourages slow-dancing as much as head-banging.

Give the whole thing a listen below (via Stereogum).

No word yet on a tour, although Horrendous do have a show coming up in Philly, where they'll be opening for Skinless.