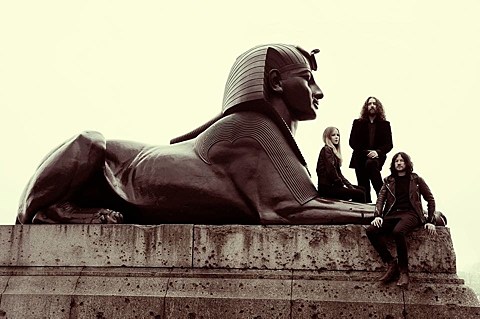 Lucifer's a powerful name because it has social, religious and literary connotations. At the same time, it's sort of an anonymous name. It's not hard to conjure that name up out of our collective unconscious. Why that name?

I had this name from the beginning. I was thinking about it for a while, whether I should do it or not, because I'm aware it's a very blunt move. [I knew] that people would say, "Who does she think she is, calling her band that?" If you look at Metal Archives, there are seven bands called Lucifer. I was actually surprised that there are only seven bands called Lucifer, because if you look up any other cliche word on Metal Archives, you will find tons and tons of bands. I thought, "The figure of Lucifer is so powerful and beautiful." I associate the band with it. Lucifer was a very misunderstood misfit. I thought it was a very beautiful metaphor and it's also a very catchy name. I thought it was great for that concept of having a heavily '70s-influenced heavy rock band. For both reasons: the superficial one -- it's a killer name for a band -- but also what Lucifer stands for. I thought it was very beautiful.

As a fan of this style of music, it has to be exciting working with Gaz Jennings.

Absolutely. I've been a Cathedral fan. He's one of the greatest guitar players of this genre that I know. He's so good. I'm thrilled to have him with it.

Last year, doom duo The Oath broke up a month after releasing their debut album, but vocalist Johanna Sadonis is now fronting a new band, Lucifer. Their debut album, Lucifer I, comes out next week (6/16) via Rise Above Records and you can stream the whole thing below via our metal sister site Invisible Oranges. IO also interviewed Johanna about their band name, working with ex-Cathedral guitarist Gaz Jennings for the album, and more. That's a quote above and you can read the rest here.

As previously mentioned, Lucifer are going on tour with High on Fire, Pallbearer and Venomous Maximus, which hits NYC for two BV/IO-presented shows: August 15 at Irving Plaza and August 18 at Music Hall of Williamsburg. Tickets for those shows are still available.

High on Fire's new album is streaming now too. Full list of tour dates, and the Lucifer album stream, below...