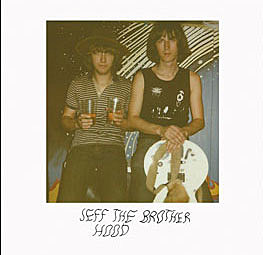 As you hopefully know, JEFF the Brotherhood are visiting again this weekend, playing tonight (6/11) at Death by Audio, Friday in Asbury Park and Sunday (6/13) at Santos with Quintron & Miss Pussycat. What I failed to mention in This Week in Indie is Jake and Jamin have a new 7" that's part of Suicide Squeeze's new singles series.

The a-side is a new song, "Mellow Out" (a phrase I don't think of normally with JEFF), and the b-side is "Heavy Days" which is the title track to their debut LP from last year, which is now in its third vinyl printing (complete with new back cover photo). The single isn't out till July 20 but you can stream it. The single is limited to 750 copies, 250 of which are being pressed on glow-in-the-dark vinyl! That's pretty rad I think. Pre-order it here.

Other releases on the Suicide Squeeze Singles Series will include Coathangers, Iron & Wine and Memoryhouse. All JEFF tourdates are below.