New York punks The Jukebox Romantics are gearing up to release the Fires Forming EP -- their first release since 2018 -- this Friday (12/17) via Sell The Heart Records (US) and Engineer Records (UK) (pre-order). Vocalist/guitarist Mike Terry gives some background:

We went into the studio in August 2019 with the idea of starting the process of a full length. We got all the music done on five songs but with a busy touring schedule, we left the studio with a plan to return in early 2020 to record more music for the release. We wanted to record about 15 songs and pick the best 10-12. We got held up in the writing process as we were looking to really push ourselves and then boom, pandemic. With the pandemic and the three of us [Terry/ Norm/ and Bobby Edge our bass player from 2014-2020 who recorded on the Fires Forming EP] living not near each other, taking the virus very seriously, we put the recording on hold until it was safe to return.

Time passed and it was finally safe to return to the studio in Fall 2020 but we were changed people. Like many, the pandemic forced a lot of introspection, changed priorities, and with that came the exit of Bobby to the band right before heading back in to continue the process. But we had unfinished business and we all wanted to finish what we started together cause these song fucking rule and we love and respect each other. So we got back into Nada and brought the lyrics we had been writing for these songs over the quarantine into the vocal booth and sang our hearts out. Songs about protest, escapism, social change, personal change, and loneliness. For a band that prides themselves on writing fun catchy tunes, we feel like we wrote some fun catchy ass tunes that have a ton of depth and meaning behind them besides drinking songs of punk rock pirate adventuring; nothing wrong with that either!

That should give you a good idea of what to expect from this EP, which sounds straight out of the '90s Epitaph/Fat Wreck Chords era but clearly sounds inspired by the social unrest that has come to the forefront of American society in recent years.

"Somehow, in five songs, I believe we created that feeling you get at the end of listening to a full album; where you feel like you went on a journey," Mike tells us. "From start to finish, except in half the time with no filler. We're extremely proud of this release, from the music to the art and packaging. Beautiful shit. EP of the year! There I said it."

There you have it. The EP isn't officially out until Friday but a full stream premieres in this post. Listen below.

The Jukebox Romantics also have release shows this weekend in Pleasantville and The Bronx, and then they'll open for Piebald in Philly. All dates are listed below. 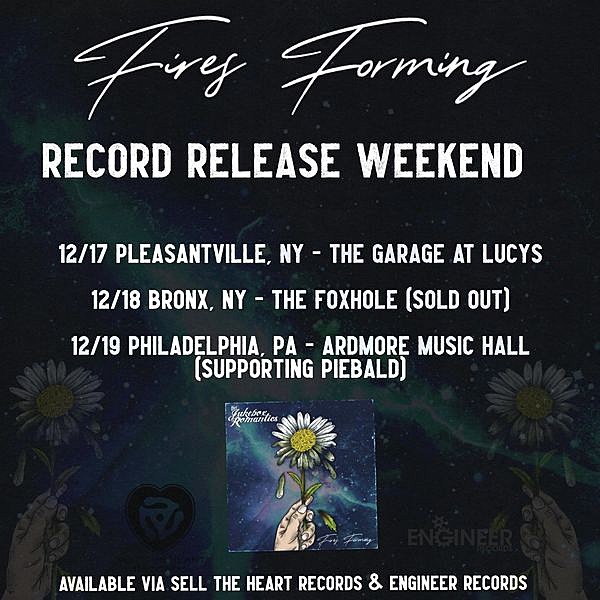