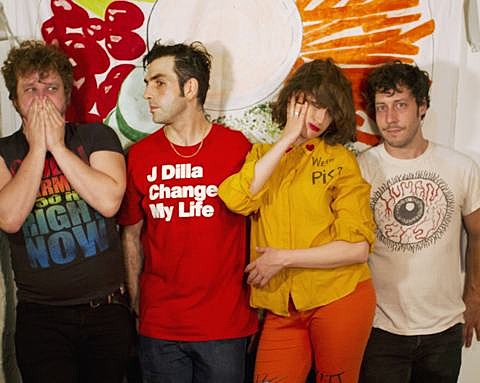 PyPy, the Montreal underground supergroup fronted by Duchess Says' Annie-Claude and Red Mass/CPC Gangbangs' Choyce, release their debut album, Pagan Day, next week (2/11) via Slovenly / Black Gladiator. The album is manically schizo, darting from overblown Stooges-style punk to funky post-punk to crazed paranoid freakouts. It's a lot of fun, and pretty hook-filled too. We're premiering a stream of the entire album -- check it out below.

PyPy will also be embarking on their East Coast tour soon and they've added a few dates since our last post. In NYC, they'll also play Death by Audio on February 27 in addition to the previously announced Cake Shop show on Febraury 28. The DbA show also has Maica Mia, which features Mauro of Godspeed You! Black Emperor, and Cyanide Tooth.

Go see them if they're in a city near you -- Annie Claude is a pistol/troublemaker live, which is always makes for a good nervous time. All PyPy tour dates are listed, along with the album stream, below.