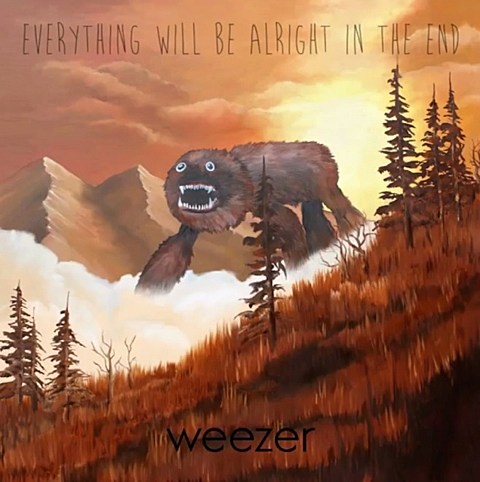 Next week (October 7) is a pretty major album release week, which means a lot of major albums are streaming in full this week. We already posted full album streams from Zola Jesus, Godflesh, Iceage and Single Mothers, and here's a roundup of some of the other anticipated records coming out this Tuesday.

Aussie/UK's Allo Darlin make more of their charming indie pop on We Come From the Same Place, due out via Slumberland. You can listen to that one at Pitchfork. Their tour hits Glasslands in October.

A Winged Victory for the Sullen, aka the duo of Stars of the Lid's Adam Wiltzie and pianist/composer Dustin O'Halloran, release their droning new album, Atomos, via Kranky. Listen at NPR.

Dan Snaith's electronic psych dancepop return as Caribou, Our Love, is coming via Merge and can now be streamed at iTunes Radio. His tour with album collaborator Jessy Lanza hits Webster Hall twice in November.

Mary Timony's (Wild Flag, Helium, Autoclave) current band Ex Hex have been killing it as a live band for a while and their debut album Rips finally comes out next week via Merge. It's packed with ultra-catchy glammy punk and can be streamed at NPR. They're touring with Speedy Ortiz soon.

Justin Vernon associate Field Report brings in new synthy layers to his folk songs on Marigolden, due via Partisan. That can be streamed at Pitchfork.

Foxygen will release their wacky, long, psychedelic double album, ...And Star Power, in two weeks (10/14) via Jagjaguwar, but that one's streaming now too. You can listen via NPR. They'll be on tour soon too.

Former Smiths guitarist Johnny Marr, who has also played in The The, Electronic, Modest Mouse, The Cribs and more, goes solo for his second time with Playland, coming via Warner Bros and following last year's solo debut, The Messenger. That can be streamed in full below via Spotify. His upcoming tour includes two NYC shows and a NJ show in November.

The great hip hop weirdo DOOM (aka MF Doom) seemingly never stops collaborating, and next week he'll be teaming up with the young impressive Brooklyn rapper Bishop Nehru for NehruvianDOOM, via Lex/Noizy Cricket!!. You hear that over at Pitchfork.

Brooklyn goth country collective O'Death have a super raw record, Out of Hands We Go, coming next week through Northern Spy. Listen in full (via CMJ) below. Theyll be on tour with Death Vessel and Stone Jack Jones soon.

Psychedelic duo Peaking Lights sound funkier than ever on their newest album, Cosmic Logic, coming out via Domino affiliate Weird World. There's an appropriately trippy album visualizer with the stream over at Domino's site. Check it out. They'll be in NYC to make four different appearances this week.

The newest installment of Famous Class' LAMC series of split 7"s comes out next week with Speedy Ortiz's "Doomsday" and Chris Weisman's "I Took It Off A Record." The Speedy song is more of their quality indie rock and Chris's track leans more on the folk side. Stream both tracks below. Speedy are touring with Ex Hex soon.

Steve Gunn's kinda-psychedelic folk and excellent guitar playing are intact for his newest LP, Way Out Weather, due via Paradise of Bachelors. Listen at NPR.

Stevie Nicks' newest, 24 Karat Gold: Songs From the Vault, which includes songs mostly written between 1969 and 1987, one from '94 and one from '95, can be streamed at Amazon. Fleetwood Mac's classic lineup is on tour now and hitting NYC for two nights at MSG in a few days.

Cult folk legend Vashti Bunyan sounds gorgeous as ever on Heartleap, her third album (following 1970's Just Another Diamond Day and 2005's Lookaftering), reportedly also her final album, and the first she produced largely on her own. It's coming out via FatCat in Europe and DiCristina in North America. Take a listen to this gem over at Pitchfork.

Wampire's new album, Bazaar, due via Polyvinyl, is genuinely weird but also genuinely rocking. Check it out for yourself, below. They'll be touring with TOPS and also playing CMJ.

Weezer have gone for the "comeback" album a few times already, and they're going for it again on Everything Will Be Alright in the End. Does it live up? Is it a return to form? (I'd say it's a return to Green Album, personally.) Hear it for yourself on iTunes Radio.

And lastly, this one's not a full album stream, but speaking of '90s bands making returns to form, Rancid definitely sound like they're doing just that with the three songs they put out from their new album, ...Honor Is All We Know, due out 10/27 via Hellcat/Epitaph. It was produced by Bad Religion guitarist/Epitaph CEO Brett Gurewitz (whose band is also riding the "do it like we did in our prime" train). Watch a video with those three tracks below.

O'Death - Out of Hands We Go