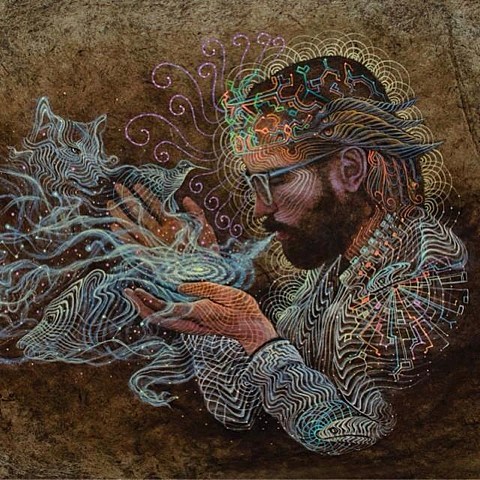 Back in the early-mid 2000s, Alan Scheurman fronted the underrated Detroit art rock band Rescue, who transitioned from a spastic math rock-inspired band on 2002's Volume Plus Volume to a simmered-down but still eccentric one on their third and final album, Paranoid (2006). After their breakup, he put out the 2008 solo record, Old Patterns, produced by main His Name Is Alive member Warren Defever. (Rescue pianist/violinist Cassandra Verras also joined His Name Is Alive, and other members now play in Child Bite and Jamaican Queens.) And as this very detailed Metro Times article points out, two years later he moved to Brooklyn to embark on a new spiritual path. That same year, "elders of the Wixáritari peoples" gave him the name Santiparro, which Alan says means "the lens that sees many things not usually seen."

Alan also took on Santiparro as his musical moniker, and put out his first album under that name, True Prayer, earlier this year. The album features some impressive guests, including Will Oldham (aka Bonnie 'Prince Billy), TV on the Radio's Kyp Malone, Bear In Haven's Adam Wills, Young Magic's Melati Malay, and NewVillager's Ben Bromley. The result is a highly psychedelic folk album, which you can stream in full below. Also below is the brand new video for the Will Oldham-featuring "The Benefit Of Confrontation," which premieres in this post.